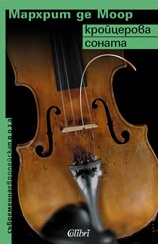 De Moor has built her latest novel around the Kreutzersonate by the Czech composer, Leos Janácek, who, in turn, based his string quartet on the novel of the same name by Leo Tolstoy. In Tolstoy’s story, a man and a woman are playing the sonata Ludwig van Beethoven composed for the French violinist and composer, Rudolphe Kreutzer. The two fall in love as they play, which poisons the husband’s mind with jealousy, so that he kills his wife. This theme provides the main story of de Moor’s book. The main character is Marius van Vlooten, a blind music critic who, following a disastrous youthful love affair, has never fallen in love again. In a plane on the way to a master class in Bordeaux, he meets a young musicologist–the narrator of the story–who introduces him to the violist, Suzanna Flier. When the critic hears Suzanna play the violin part from Janáceks Kreutzer Sonata, he is entranced and falls in love with her. The violinist returns his love; they marry and are happy together for a long time. But all that changes when Van Vlooten begins to imagine that Suzanna is having an affair with the viola player in the quartet. The critic becomes so jealous that he attempts to murder her.

Margriet de Moor (born 1941) debuted in 1988 with the collection of stories, "Op de rug gezien" (Seen From Behind), followed by three novellas in one volume, "Dubbelportret" (Double Portrait, 1989). These publications earned her the Lucy B. and C.W. van der Hoogt Prize in 1990. Her highly praised first novel, "Eerst grijs dan wit dan blauw" (First Grey, Then White, Then Blue, 1990) won her the AKO Literature Prize, for which "De virtuoos" (The Virtuoso, 1993) was also nominated. She has since published successful novels such as "Hertog van Egypte" (The Duke of Egypt, 1996) and "Zee-binnen" (The Sea Road, 1999).