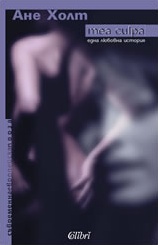 This is the story of the great and quite impossible love between two women – an echo of the author’s personal life, told without inhibitions. Two women fight for their love and pay the price which might even be a human life.

Anne Holt is a bestselling thriller writer with three million books sold worldwide, and a former minister of justice, lawyer, journalist, and TV news editor and anchor. "What is mine" is her English language debut and the first of a three–book series featuring ex–FBI profiler Vik and police detective Stubo. A former resident of the United States, Anne Holt currently resides in Norway and France.