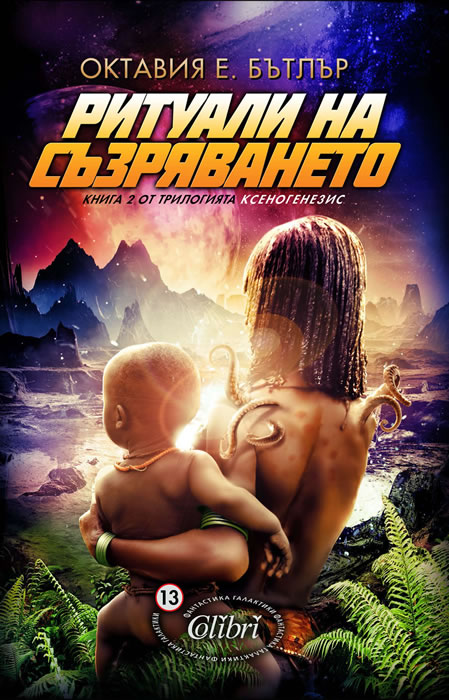 In this sequel to Dawn, Lilith Lyapo has given birth to what looks like a normal human boy named Akin. But Akin actually has five parents: a male and female human, a male and female Oankali, and a sexless Ooloi. The Oankali and Ooloi are part of an alien race that rescued humanity from a devastating nuclear war, but the price they exact is a high one - the aliens are compelled to genetically merge their species with other races, drastically altering both in the process. On a rehabilitated Earth, this "new" race is emerging through human/Oankali/Ooloi mating, but there are also "pure" humans who choose to resist the aliens and the salvation they offer. These resisters are sterilized by the Ooloi so that they cannot reproduce the genetic defect that drives humanity to destroy itself, but otherwise they are left alone (unless they become violent). When the resisters kidnap young Akin, the Oankali choose to leave the child with his captors, for he - the most "human" of the Oankali children - will decide whether the resisters should be given back their fertility and freedom, even though they will only destroy themselves again. This is the second volume in Octavia Butler's Xenogenesis series, a powerful tale of alien existence.

Categories
Contemporary Fiction"Galaxies" SeriesFantasy and Science Fiction
About the Author

Octavia Estelle Butler was an American science fiction writer and author of novels, short stories and essays. A recipient of both the Hugo and Nebula awards, Butler was one of the best-known African-American women in the field.

“Who am I? I'm a 56-year-old writer who can remember being a 10-year-old writer and who expects someday to be an 80-year-old writer. I'm comfortably asocial — a hermit living in a large city — a pessimist if I'm not careful; a student, endlessly curious; a feminist; an African American; a former Baptist; and an oil and water combination of ambition, laziness, insecurity, certainty, and drive.”