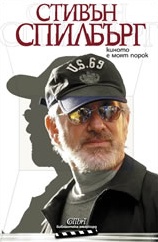 Steven Spielberg has become a brand name and a force that extends far beyond the movie screen. Phrases like “phone home” and the music score from “Jaws” are now part of our cultural script, appearing in commercials, comedy routines, and common conversation. Yet few scholars have devoted time to studying Spielberg’s vast output of popular films despite the director’s financial and aesthetic achievements.

Spanning 25 years of Spielberg’s career, this book explores the issues, themes, and financial considerations surrounding his works. The blockbuster creator of “E.T.”, “Jaws” and “Schindler’s List” talks about dreams and the almighty dollar.

Ranging from Spielberg’s twenties to his mid-fifties, the interviews chart his evolution from a brash young film-maker trying to make his way in Hollywood, to his spectacular blockbuster triumphs, to his maturation as a director seeking to inspire the imagination with meaningful subjects. The Steven Spielberg who emerges in these talks is a complex mix of businessman and artist, of arrogance and insecurity, of shallowness and substance. Often interviewers will uncover the director’s human side, noting how changes in Spielberg’s personal life-marriage, divorce, fatherhood, remarriage-affect his movies.

Steven Allan Spielberg, KBE (born December 18, 1946) is an American film director, screenwriter, and film producer. "Forbes" magazine places Spielberg's net worth at $3.1 billion. In 2006, the magazine "Premiere" listed him as the most powerful and influential figure in the motion picture industry. "Time" listed him as one of the 100 Most Important People of the Century. At the end of the twentieth century, "Life" named him the most influential person of his generation. In a career of over four decades, Spielberg's films have touched on many themes and genres. Spielberg's early sci-fi and adventure films, sometimes centering on children, were seen as an archetype of modern Hollywood blockbuster filmmaking. In later years his films began addressing such issues as The Holocaust, slavery, war and terrorism.

Spielberg won the Academy Award for Best Director for 1993's Schindler's List and 1998's Saving Private Ryan. Three of Spielberg's films, Jaws (1975), E.T. the Extra-Terrestrial (1982), and Jurassic Park (1993), broke box office records, each becoming the highest-grossing film made at the time. To date, the unadjusted gross of all Spielberg-directed films exceeds $8.5 billion worldwide.