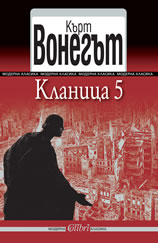 "Slaughterhouse-Five, or The Children's Crusade: A Duty-Dance With Death" is a 1969 novel by best-selling author Kurt Vonnegut. One of his most popular works and widely regarded as a classic, it combines science fiction elements with an analysis of the human condition from an uncommon perspective, using time travel as a plot device and the bombing of Dresden in World War II, the aftermath of which Vonnegut witnessed, as a starting point.

When the book was released, the bombing of Dresden was not widely known and was rarely discussed by veterans and historians. The book led to an increased awareness of the bombings and a reevaluation of the justifications given for aerial bombing of cities by the Allies during the war.