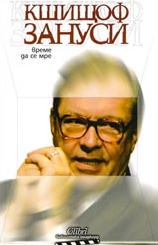 “Time to Die” is an intriguing certificate about dilemmas of the artists during the years of totalitarianism – the problems that may seem strange to the newer generations, but will certainly touch everyone who has ever faced the ideological madness.

Krzysztof Zanussi (born 1939), Poland based filmmaker, writer and producer, is a major figure in European cinema. A professor at the Silesian University in Katowice and former president of FERA (Fédération Européenne des Réalisateurs de l'Audiovisuel), he is director of the Polish film studio TOR. Zanussi studied physics, film and philosophy in Warsaw and Krakow and graduated in film direction from the Lodz Film School. Since 1966 he has directed numerous documentaries and feature films and worked for television. Zanussi has also worked as stage and opera director in Poland, Germany, France, Russia, Italy and Switzerland. Krzysztof Zanussi is the author of the following books: "On editing an amateur film" (1968), "Discourse on an amateur film" (1978), memoirs "Time to Die" (1999).