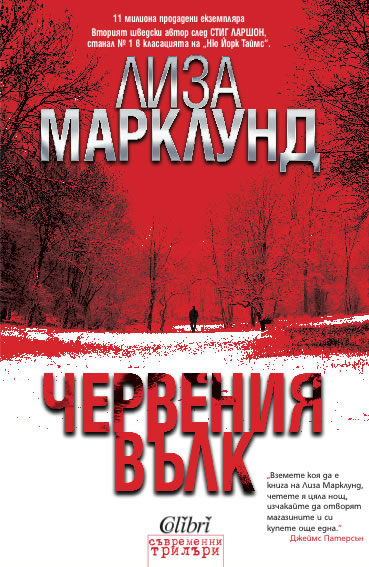 A journalist is murdered in the frozen white landscape of a northern Swedish town. Annika Bengtzon, a reporter at a Stockholm-based tabloid, was planning to interview him about a long-ago attack against an isolated air base nearby, and now she suspects that his death is linked to that attack.

Against the explicit orders of her boss, she begins to investigate the event, which is soon followed by a series of shocking murders. Annika knows the murders are connected. At the same time, she begins to suspect that her husband is hiding something, and nothing can counteract the loneliness that has crept into her life.

Behind everything lurks the figure of the Red Wolf, a cold-blooded killer with the soul of a lover. In the end, she must discover the truth not only about the murders but also about the lies that are destroying her own family.

Scandinavia’s undisputed queen of crime fiction, Liza Marklund is the No. 1 international bestselling author of the Annika Bengtzon series.

Liza Marklund was born in 1962 in the small village of Pålmark, close to the Arctic Circle in Sweden. She is an author, journalist, columnist, and goodwill ambassador for UNICEF. She is also co-owner of Piratförlaget, one of Sweden’s most successful publishing houses. Since her debut in 1995, Liza Marklund has written eleven novels and two nonfiction books. Liza co-wrote the international bestseller The Postcard Killers with James Patterson, making her the second Swedish author ever to reach No. 1 on the New York Times bestseller list. Her crime novels featuring the gutsy reporter Annika Bengtzon have sold more than 13 million copies in 30 languages to date.

Liza Marklund worked as an investigative news reporter for ten years and as an editor in print and television news for five. Today, she also makes documentaries for television and writes for various newspapers. Her topics are often women and children’s rights. Liza has made documentaries about children with HIV/AIDS in Cambodia and Russia, and a series about domestic violence, Take a Little Beating.

Liza is also a popular columnist since 20 years. Her columns have appeared in various Swedish and international newspapers and magazines, including Financial Times in the UK, Welt am Sonntag in Germany, Dagbladet Information in Denmark, and Ilta-Lehti in Finland. She is a regular columnist in Swedish tabloid Expressen and Norwegian daily Verdens Gang. Today, Liza and her family divide their time between Stockholm in Sweden and Marbella in southern Spain.