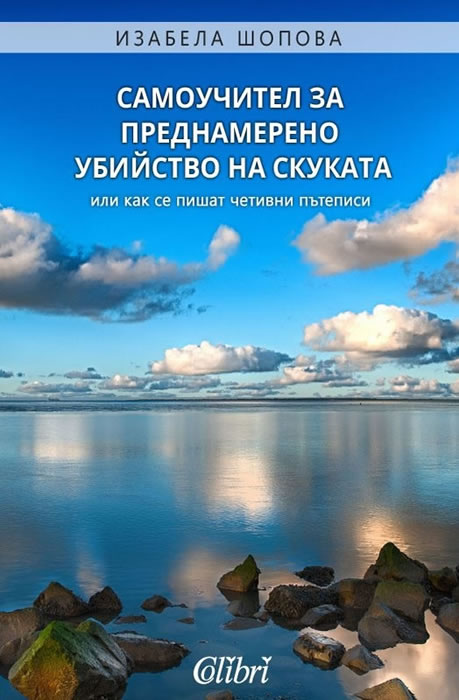 For this teach-yourself book, the author says:

And with the clear understanding that literature is made by readers, not by writers. It depends on the readers which works will be read and will remain in the history of the written word. Readers decide which text will become a classic - they dictate the rise and fall of styles, genres and authors.

The goal of the teach-yourself book is not to give a formula for a new series of monotonous travelogues, but to start dialogue, raise questions, expose misconceptions, throw in ideas and give authors a point of reference for personal creative pursuits.

As a reader, I tried to describe the travelogues I would like to read."

Categories
Contemporary FictionTravel
About the Author

Izabela Shopova (born 1971 in Varna) is a Bulgarian writer, now living and writing in Australia.

A child prodigy, she learned to read at age of 4, graduated from high school at 15, played piano and dreamed of conquering space. She was a professional model and an amateur astronomer; worked in a radio station but never planned to write on her own... She graduated from the local technical university, with major in radio engineering and then stepped in a completely different direction by establishing a career in business.

In 2002 she moved to New Zealand together with her husband and daughter. She wrote her first letter from the “Land of the Long White Cloud”, which became an instant hit back in Bulgaria. It was published by numerous websites, newspapers and travel magazines. She went on writing about first hand experiences and second hand memories, thus bringing together parallel cultures and histories… Some of her travelogues won awards in travel writing./ide.li; okolosveta.com/ Gradually, much to her own surprise, she emerged as a professional writer. She put together a collection of her writings – a fascinating amalgam of episodes from the everyday life of an immigrant and the amazing adventures of a tourist… Her first published book “East - in Eden” surpassed the success of her Internet publications and gave the readers a legitimate reason to call her “The Bulgarian Bill Bryson”.

Izabela Shopova lives now in Brisbane, Australia; she still writes for the electronic media and Bulgarian travel magazines and works on her second book about her family adventures in Aussie-Land.