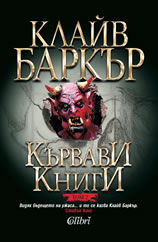 “The Books of Blood” are a series of horror fiction collections written by the British author Clive Barker. This is volume 1. There are six books in total, each simply subtitled Volume 1 through to Volume 6, and were subsequently re-published in two omnibus editions containing three volumes each. Each volume contains four or five stories. The volume 1-3 omnibus was published with a foreword by Barker's fellow Liverpudlian horror writer Ramsey Campbell.

They were published between 1984 and 1985. With the publication of the first volume, Barker became an overnight sensation and was hailed by Stephen King as "the future of horror". The book won both the British and World Fantasy Awards.

Although undoubtedly horror stories, like most of Barker's work they mix fantasy themes in as well. The tales invariably take place in a contemporary setting, usually featuring everyday people who become embroiled in terrifying or mysterious events. Barker has stated in Faces of Fear that an inspiration for “The Books of Blood” was when he read Dark Forces in the early 1980s and realized that a horror story collection need not have any narrow themes, consistent tone or restrictions. The stories could range from the humorous to the truly horrific. For some editions, each book's cover was illustrated by Clive Barker himself. Many of the stories in “The Books of Blood” were adapted by Eclipse Books in the comic series Tapping the Vein as well as other titled adaptations.

Clive Barker (born 5 October 1952) is an English author, film director and visual artist best known for his work in both fantasy and horror fiction. Barker came to prominence in the mid-1980s with a series of short stories which established him as a leading young horror writer. He has since written many novels and other works, and his fiction has been adapted into motion pictures, notably the Hellraiser and Candyman series.