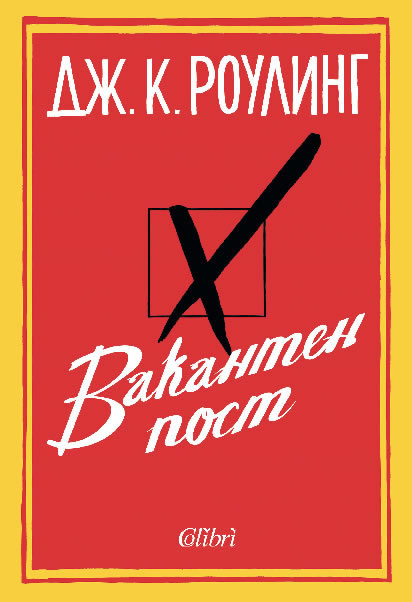 The Casual Vacancy is a 2012 tragicomedy novel written by British author J.K. Rowling. The book was published worldwide by Little, Brown Book Group on 27 September 2012. It was Rowling's first publication since the Harry Potter series, her first apart from that series, and her first novel for adults.

The novel is set in a suburban West Country town called Pagford and begins with the death of Parish Councillor Barry Fairbrother. Subsequently, a seat on the council is vacant and a war breaks out before the election for his successor takes place. Factions develop, particularly concerning whether to dissociate with a local council estate, "the Fields" — which Barry supported an alliance with. However, those running for a place soon find their darkest secrets revealed on the Parish Council online forum, ruining their campaign and leaving the election in turmoil.

Major themes in the novel are class, politics and social issues like that of drugs, prostitution and rape. The novel was the fastest-selling in the United Kingdom in three years and had the second best-selling opening week there since Dan Brown's The Lost Symbol. It became the 15th best-selling book of 2012 during its first week of release. Within the first three weeks the book’s total sales have topped one million copies in English in all formats across all territories, including the U.S. and the U.K.  The book also set a Goodreads record for the all-time biggest "started reading" day.

The book is being adapted into a BBC television drama for release in 2014.

J. K. Rowling was born on July 31st 1965. She is a British novelist, best known as the author of the Harry Potter fantasy series. The Potter books have gained worldwide attention, won multiple awards, and sold more than 450 million copies. They have become the best-selling book series in history, and been the basis for a popular series of films, in which Rowling had overall approval on the scripts as well as maintaining creative control by serving as a producer on the final installment. Rowling conceived the idea for the series on a train trip from Manchester to London in 1990.

Rowling has led a "rags to riches" life story, in which she progressed from living on social security to multi-millionaire status within five years. She is the United Kingdom's best-selling author since records began, with sales in excess of £238m. As of March 2011, when its latest world billionaires list was published, Forbes estimated Rowling's net worth to be US$1 billion. The 2008 Sunday Times Rich List estimated Rowling's fortune at £560 million ($798 million), ranking her as the twelfth richest woman in the United Kingdom. Forbes ranked Rowling as the forty-eighth most powerful celebrity of 2007, and Time magazine named her as a runner-up for its 2007 Person of the Year, noting the social, moral, and political inspiration she has given her fans. In October 2010, Rowling was named the "Most Influential Woman in Britain" by leading magazine editors. She has become a notable philanthropist, supporting such charities as Comic Relief, One Parent Families, Multiple Sclerosis Society of Great Britain and Lumos (formerly the Children's High Level Group).

On 27 September 2012, Rowling published her first adult novel The Casual Vacancy with Little, Brown and Company.