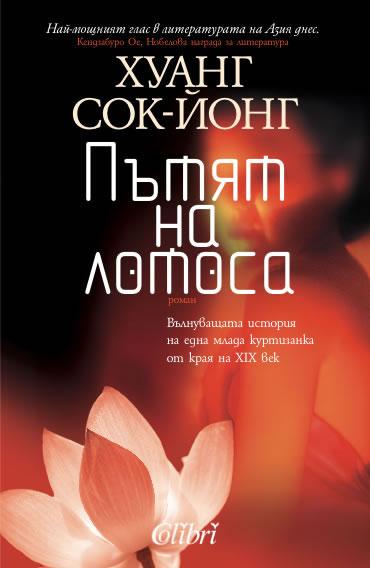 Shim Chung, published in 2003, was adapted from a pansori, the traditional Korean mono-opera, based on an old Taoism tale.

Here is what Hwang Sok-yong says about the novel: “I wrote about prostitution and the change of East Asia in the 19th century seen at a market in modern times. In the pansori Shim Chung-ga, Chung is sold to Chinese merchants at the expense of making her blind widowed father open his eyes. She is offered as a sacrifice for the sake of the safe voyage by being thrown deep into the sea… Here I decided to remove the factor of the laudable virtue of Loyalty to Kind and Commitment to Parents, the fundamental ideology that upheld the social system in those times. I think it was a gadget to maintain the feudal social system. We can easily imagine what happened to those young girls after they were sold for a large sum of money to foreign merchants from the nature of worldly affairs to pursue interest. I found out that there are many stories about the girls who were sold abroad across the sea. In most places, their names have been handed down in their memorial tablets in the temple. They never came back home. More historical backups can be found in Japan. I sought some similarity between these girls and women workers of South Korea who went up to Seoul to seek jobs in factories to end up eventually ruining themselves during the period of modernization in the 1970s. Their parents and siblings might have enshrined the tablets for their sisters who didn't come back even long after they sent money to them for the last time.

The modernization of East Asia is represented by free trade and market share. Modern cities and streets were built and labor products in every country evolved into new types: wage labor and prostitution. I did not examine this trend in a historical context in the novel. Rather, I try to focus on how the body and soul of a woman change in such an environment. It was like the life of a lotus flower that opens its bud with the morning dew, gets troubled with the scorching sun and the storm, meets and sends away passersby, and spends day and night throughout the year.”

Hwang Sok-yong (born January 4, 1943) is a South Korean novelist known as a longtime dissident against the South Korean government. His first novel The Chronicle of a Man Named Han, the story of a family separated by the Korean War, was published in 1970. The novel is still topical today after Kim Dae-jung’s visit to North Korea and meeting with Kim Jong-il led to reunion programes for separated families, and talk of reunification. The Chronicle of a Man Named Han was translated into French by Zulma in 2002.
Hwang Sok-yong published a collection of stories, The Road to Sampo in 1974, and became a household name with his epic, Chang Kil-san (also spelled Jan Gilsan), which was serialized in a daily newspaper over a period of ten years (1974–84). Using the parable of a bandit from olden times (“parables are the only way to foil the censors”) to describe the contemporary dictatorship, Chang Kil-san was a huge success in North as well as South Korea. It sold an estimated million copies, and remains a bestseller in Korea fiction today.
Hwang Sok-yong also wrote for the theatre, and several members of a company were killed while performing one of his plays during the 1980 Kwangju uprising. During this time Hwang Sok-yong went from being a politically committed writer revered by students and intellectuals, to participating directly in the struggle.