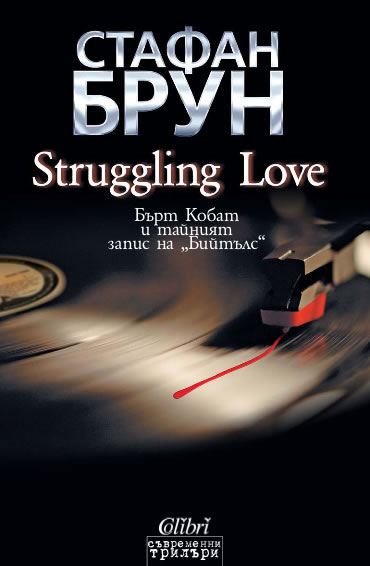 At 11.35 on Saturday, 8 August, 2009, hundreds of Beatles fans gathered at the famous pedestrian crossing in north London to celebrate the fortieth anniversary of the band’s photo shoot that took place there at that precise time for the iconic sleeve of their 1969 Abbey Road album. The inside flap of the dust jacket of Staffan Bruun’s latest Burt Kobbat crime novel, Struggling Love, shows the author using the same zebra crossing.

Many readers will agree that this is among the best of the nine Kobbat novels that Bruun’s pen has so far produced. It is a pacy story, written with the author’s usual zest and with plenty of suspense to ensure a rapid read, with its naturalistic dialogue and terse, accurate description. The local colour is striking and varied, as the action takes the reader from Copenhagen via Helsinki to London, England, and from there to Birmingham, Alabama. On the way, the spoken exchanges are slick and propelling; like the author himself, Kobbat is not an investigative journalist for nothing!

The novel takes its title from that of an imaginary song that Paul McCartney composed and recorded on a yacht in the Caribbean in the sixties. Now a putative tape recording of the unreleased song has re-surfaced, and the possessor needs a reel-to-reel recorder to play it on, which is not immediately available – a plot device for added suspense. The short first chapter portrays the Beatle in the act of composing and recording the song, and the reader realises – with more certainty than the characters – that this must be the very tape that is subsequently found in murdered Marion’s handbag 44 years later and becomes key to the plot. Her murder, which kick-starts the action, occurs in chapter 2; and so, from this point on, the plot unwinds through, curiously, 44 chapters.

The love-interest is provided by a close female friend and former fellow-student of the American murder victim, Jette Nielsen, a Danish divorcee, who once studied in the southern US state of Alabama. From here comes a connection with a religious extremist who wants to drastically edit the tape recording and will stoop to anything to get his hands on it. On a mission of revenge, he wants to alter Paul McCartney’s lyrics to include an admission by the singer-songwriter that he is possessed by the devil. Far-fetched maybe, but the gripping plot develops with credibility and speed and concludes with a satisfying surprise climax.

In a parallel subplot, the protagonist’s life as that of a divorced millionaire is complicated by his selling of the film rights of his children’s book character, Hugo the Humble-Bee, to the Disney Corporation, who have politicised the narrative and renamed the bee Hugo the Freedom Fighter, and by his ex-wife’s claims to his estate. This sees Kobbat in chapter 2 in Copenhagen for the European premiere of the film, where he meets Jette, and after a return to Helsinki, he flies off to USA via London with her, and so the two threads mesh as he juggles one set of obligations against the other.

Arcadia recently published Lars Saabye Christensen’s 1984 novel Beatles for the first time in English (in a fine translation by Don Bartlett). Interest in the Fab Four is as high as it has ever been since the group disbanded, and clever publishers will continue to use both real and fictitious material that draws on or refers to their life or work for as long as it lasts. A novel such as Struggling Love, bearing on its front cover the description ‘Burt Kobbat on the hunt for a missing Beatles tape’, should find a ready market in the English-reading world, and not only among lovers of contemporary crime fiction.

Born in Helsinki in 1955, Staffan Bruun has been working for Hufvudstadsbladet, Finland’s national Swedish-language newspaper, since 1980. He rapidly established himself as an intrepid crime reporter, and in the 1990s, when he also was the editor-inchief of the newspaper, Bruun ventured into crime fiction with a series of novels in large part inspired by contemporary international underworld activities. In 2009 Staffan Bruun was granted the Topelius Prize for his journalistic achievements.