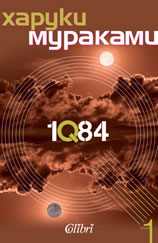 The year is 1984, but not for long. Aomame, on her way to meet a client--the gravid implications of which only come clear later--sits in a taxi, stuck in traffic. On a lark, she takes the driver's advice, bolts from the cab, walks onto the elevated Tokyo expressway, descends an emergency ladder to the street below, and enters a strange new world.

In parallel, a math teacher and aspiring novelist named Tengo gets an interesting offer. His editor has come upon an entry for a young writer's literary prize, a story that, despite its obvious stylistic drawbacks, strikes a deeply moving chord with those who've read it. Its author is a mysterious 17-year-old, and the editor proposes that Tengo quietly rewrite the story for the final round of the competition.

So begins Haruki Murakami's magnus opus, an epic of staggering proportions. As the tale progresses, it folds in a deliciously intriguing cast of characters: a physically repulsive private investigator, a wealthy dowager with a morally ambiguous mission, her impeccably resourceful bodyguard, the leader of a somewhat obscure and possibly violent religious organization, a band of otherworldly "Little People," a door-to-door fee collector seemingly immune to the limits of space and time, and the beautiful Fuka-Eri: dyslexic, unfathomable, and scarred.

Aomame names her new world "1Q84" in honor of its mystery: "Q is for 'question mark.' A world that bears a question.'" Weaving through it, central motifs--the moon, Janáček's Sinfonietta, George Orwell's 1984--acquire powerful resonance, and Aomame and Tengo's paths take on a conjoined life of their own, dancing with a protracted elegance that requires nearly 1,000 pages to reach its crowning denouement.

1Q84 was a runaway best seller in its native Japan, but it's more instructive to frame the book's importance in other ways. For one, it's hard not to compare it to James Joyce's Ulysses. Both enormous novels mark their respective author's most ambitious undertaking by far, occupy an artificially discrete unit of time (Ulysses, one day; 1Q84, one year), and can be read as having a narrative structure that evinces an almost quantum-mechanical relationship to reality, which is not to say that either author intended this.

More to the point, the English translation of 1Q84--easily the grandest work of world literature since Roberto Bolaño's 2666--represents a monstrous literary event. Now would somebody please award Murakami his Nobel Prize? --Jason Kirk

“A book that . . . makes you marvel, reading it, at all the strange folds a single human brain can hold . . . A grand, third-person, all encompassing meganovel. It is a book full of anger and violence and disaster and weird sex and strange new realities, a book that seems to want to hold all of Japan inside of it . . . Murakami has established himself as the unofficial laureate of Japan—arguably its chief imaginative ambassador, in any medium, to the world: the primary source, for many millions of readers, of the texture and shape of his native country . . . I was surprised to discover, after so many surprising books, that he managed to surprise me again.”
—Sam Anderson, The New York Times Magazine

“Profound . . . A multilayered narrative of loyalty and loss . . . A fully articulated vision of a not-quite-nightmare world . . . A big sprawling novel [that] achieves what is perhaps the primary function of literature: to reimagine, to reframe, the world . . .  At the center of [1Q84’s] reality . . . is the question of love, of how we find it and how we hold it, and the small fragile connections that sustain us, even (or especially) despite the odds . . . This is a major development in Murakami’s writing . . . A vision, and an act of the imagination.”
—David L. Ulin, Los Angeles Times

“Murakami is clearly one of the most popular and admired novelists in the world today, a brilliant practitioner of serious, yet irresistibly engaging, literary fantasy . . . Once you start reading 1Q84, you won’t want to do much else until you’ve finished it . . . Murakami possesses many gifts, but chief among them is an almost preternatural gift for suspenseful storytelling . . . Despite its great length, [his] novel is tightly plotted, without fat, and he knows how to make dialogue, even philosophical dialogue, exciting . . . Murakami’s novels have been translated into a score of languages, but it would be hard to imagine that any of them could be better than the English versions by Jay Rubin, partnered here with Philip ­Gabriel . . . There’s no question about the sheer enjoyability of this ­gigantic novel, both as an eerie thriller and as a moving love story . . . I read the book in three days and have been thinking about it ever since.”
—Michael Dirda, The Washington Post

“Fascinating . . . A remarkable book in which outwardly simple sentences and situations snowball into a profound meditation on our own very real dystopian trappings . . . One of those rare novels that clearly depict who we are now and also offer tantalizing clues as to where literature may be headed . . . I’d be curious to know how Murakami’s yeoman translators Jay Rubin and Philip Gabriel divided up the work . . . because there are no noticeable bumps in the pristine and deceptively simple prose . . . More than any author since Kafka, Murakami appreciates the genuine strangeness of our real world, and he’s not afraid to incorporate elements of surrealism or magical realism as tools to help us see ourselves for who we really are. 1Q84 is a tremendous accomplishment. It does every last blessed thing a masterpiece is supposed to—and a few things we never even knew to expect.”
—Andrew Ervin, The San Francisco Chronicle

“[1Q84] is fundamentally different from its predecessors. We realize before long that it is a road. And what the writer has laid down is a yellow brick road. It passes over stretches of deadly desert, to be sure, through strands of somniferous poppies, and past creatures that hurl their heads, spattering us with spills of kinked enigma. But the destination draws us: We crave it, and the craving intensifies as we go along (unlike so many contemporary novels that are sampler menus with neither main course nor appetite to follow). More important, the travelers we encounter, odd and wildly disparate as they are, possess a quality hard to find in Murakami’s previous novels: a rounded, sometimes improbable humanity with as much allure as mystery. It is not just puzzlement they present, but puzzled tenderness; most of all in the two leading figures, Aomame and Tengo. Converging through all manner of subplot and peril, they arouse a desire in us that almost mirrors their own . . . Murakami makes us want to follow them; we are reluctant to relinquish them. Who would care about the yellow brick road without Scarecrow’s, Woodman’s and Lion’s freakiness and yearning? What is a road, particularly Murakami’s intricately convoluted road, without its human wayfarers?”
—Richard Eder, The Boston Globe

“1Q84 is one of those books that disappear in your hands, pulling you into its mysteries with such speed and skill that you don’t even notice as the hours tick by and the mountain of pages quietly shrinks . . . I finished 1Q84 one fall evening, and when I set it down, baffled and in awe, I couldn’t help looking out the window to see if just the usual moon hung there or if a second orb had somehow joined it. It turned out that this magical novel did not actually alter reality. Even so, its enigmatic glow makes the world seem a little strange long after you turn the last page. Grade: A.”
—Rob Brunner, Entertainment Weekly

“A 932-page Japanese novel set in Tokyo in which the words ‘sushi’ and ‘sake’ never appear but there are mentions of linguine and French wine, as well as Proust, Faye Dunaway, The Golden Bough, Duke Ellington, Macbeth, Churchill, Janáèek, Sonny and Cher, and, give the teasing title, George Orwell? Welcome to the world of Haruki Murakami . . . A symmetrical and multi-layered yarn, as near to a 19th-century three-decker as it is possible to be . . . The label of fantasy-realism has been stuck to it, but it actually has more of a Dickensian or Trollopian structure . . . Explicit, yet subtle and dream-like, combining viciousness with whimsy . . . this is Murakami’s unflagging and masterful take on the desire and pursuit of the Whole.”
—Paul Theroux, Vanity Fair