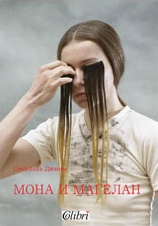 "The first impression this book leaves on the reader is compressed to the point of explosion fictional onset. A person’s life flows by like a film reel in the stream of consciousness. However, this is not a kaleidoscope of selected idyllic pictures and sweetened dreams but it is from the mainstream of merciless reality… Svetlana Dicheva’s fiction is humane and compassionate, and sometimes naturalistic. Her writing does not deprive you from the faith in life but makes you want to improve it. The great pains of the world – Jewry, genocide, discrimination are interwoven in her narrative." Ivan Robanov

"Mona and Magellan is a Bildungsroman. Another success of the novel is in its existential plan. Mona and Magellan is the story of an orphan girl in her teens who is trying to cope with the image of her father – whom she overidelises and hates at the same time. Mona is a smart child and therefore “a problem child”. Her experiences are described with a large dose of understanding and mastery." Yordan Eftimov

It is no surprise that the well-known radio journalist and short story writer, Svetlana Dicheva, has decided to use the novel as a vehicle for her literary quests. No wonder that according to the literary critics the result is a pronounced success in contemporary Bulgarian fiction, which was marked by stagnation after the social and political changes of 1989.

Vividly and with a fascinating dose of humour, the novel tells the complex life story of an extraordinary teenager shaped in the years of the so-called “developed socialist society”. It is a curious and enlightening insight into the socio-psychological complexities of that period, posing the constant existential questions about who and why we are and suggesting revelations that are interesting and worthwhile pondering along that line. Svetlana Dicheva looks through the eyes of an objective explorer and not of a raging negator of the system.

Mona’s partly Jewish origin becomes the reason for her spiritual sufferings even in her childhood, due to the attitude of her classmates. She has to cope with her hatred for her father, a devoted and active communist party member, who committed suicide in jail after being falsely accused of treachery by the communist authorities. This complex childhood nourished by her equally complex nature takes Mona through the hell of her complicated relationships with her mother and the rest of the world. However, in spite of the extraordinary individual lot of the protagonist, or perhaps exactly for that reason, Svetlana Dicheva paints a colourful picture of human relationships in general, achieving a universal pitch in her worthwhile endeavour to understand and explain human nature. “I am living in this horrible world, where solitude is a rule and intimacy is dubious, even dangerous.” This realistic conclusion has clear notes of Camus, while the factual and social reality in which the novel spins reminds us at times of the absurd world of Kafka. Like Salinger’s Holden from the Catcher In the Rye, Mona is a teen, unafraid and eager to ask herself the why’s. She insists on, and perseveres in discovering the right or at least satisfactory answers to her questions about her existence in this world. She travels a long and hard way and suffers great losses. “Some people have assimilated themselves so much to agony, that when you deprive them of it, there is nothing left of them.” Mona does not become one of those. With age, suffering only tempers her heart, without killing it and that is Mona’s hard-won but worthwhile victory of conquering her self.

The author’s brilliant aphoristic style and the action-driven plot, make the novel an interesting and insightful reading for a wide range of readers of various ages.

Svetlana Dicheva was born on January 14, 1960 in the city of Plovdiv. She graduated from the French Language School in the town of Sliven and majored in Radio Journalism in the Faculty of Journalism of the Sofia University “Kliment Ohridski”. For more than 20 years she has been working for the Horizont programme of the Bulgarian National Radio. She has been the anchorwoman of one of the most popular radio broadcasts on political problems. For four years now she has been specialising in the field of culture and book publishing and is the anchorwoman of the weekly culture talk show “Breakfast on the Lawn”, a great part of which is dedicated to promoting new books and interviewing Bulgarian writers, publishers and translators. In 2000 she published her first book “The Balkan Prophet” which comprises 20 short stories and the short novel “Guru and His Teacher”. The book was awarded the prize of the Foundation “Bulgarka” (Bulgarian Woman) for the best book by a woman writer, and it received favourable reviews from the critics. In 2005 her short story “Cherry Orchards” was included with three short stories by other Bulgarian authors in the Internet publication “East of No East” of the English Literary Internet Magazine Route Magazine, and in the 2005 December edition of the English website www.rthposition.com her short story “Tiberius In a Hat” was published. She speaks French as well as English.