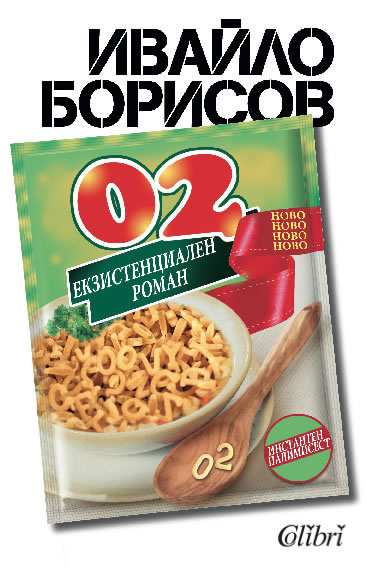 02 is an “existential” sequel to Ivaylo Borisov’s “improper novel”.

The protagonist, born at an inopportune time and place, had made an easy social leap forward in view of post-totalitarian conditions in Bulgaria and now he’s confronted with the tragic impossibility of finding the way to himself as well as finding himself in the world. 02 is a novel about the crisis – of being, of consciousness, of the modern society in the beginning of XXI century. It is painfully focused on the social and mental pathologies. It scrutinizes the cultural simulations and the cruel manipulative strategies for framing the mass conscience, for generating stereotyped modes of behavior which impede every chance for personal development.

Ivaylo Borisov is a strange cross breed – writer-designer-entrepreneur-inventor-businessman. At the age of 33, he doggedly refuses to take the world around seriously and the only answer he can give to the psychological question “Where will you be in 5 years?” is “Getting better”. He travels the world looking for an appropriate place to migrate to, because he doesn`t accept many of the forms of societal control and governance at the places he`s been to and most of all – in his motherland. He is moved by inexplicable things such as cartoon characters and the mentioning of “space” and “universe” makes him pricking. He loves meditating but sometimes this is not enough to subdue the rising fury for everything that is wrong. Though, he would never wear Superman`s costume and save the world because he is too much egocentric. His first steps in the serious writing dates back to him being 8 years old when he began two screenplays simultaneously. During the years his pen became sharper and sharper and his public writing appearances got numerous and had different shapes. Apart from the dozens of creative briefs for clients, he writes for a number of lifestyle magazines during the years and if someone arranges all the internet publications symbols one after another, a series will appear that can go beyond the Moon. The idea for writing a book comes to his mind 7 years ago while he was writing two screenplays but as everything that has touched his chaotic self, three separate plots are formed and they serve for a basis of three separate novels. The first completed is "01".