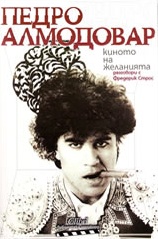 Pedro Almodóvar. The Cinema of Desires

In the conversations, published in this book, Pedro Almodóvar openly tells stories about his life, his creative process and his films.

An enfant terrible of Spanish cinema, Pedro Almodóvar (1949) is also a prominent figure in the pantheon of European film directors. For his work he has been awarded with many of the most prestigious international film distinctions, including “Oscar”, “Golden Globe”, “Cesar”, “Golden Palm” and others.