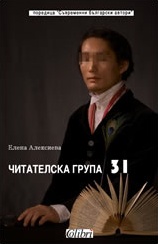 A non-existent husband, an unsold piano, a clumsily traded nightmare, and a sloppy intellectual forgotten in a second-hand bookstore… These are only some of the heroes, or perhaps the true members of Readers’ Group 31. Imagination and irony thread through all stories in this volume. Everything in them has already happened, is happening or will happen, perhaps even as you're reading. There are no impossible stories.

The World around Me
Mariana Furkova