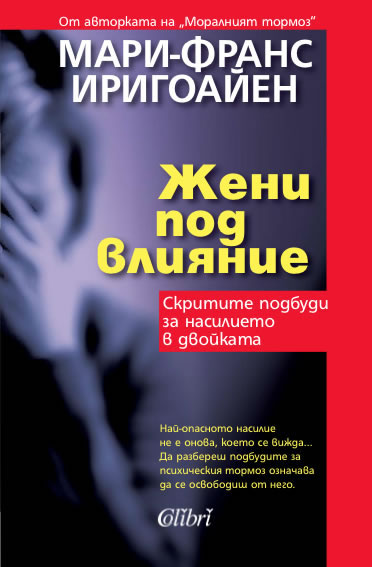 Every year one of every ten women in France becomes a victim of violence within the family. Every fifteen days three women die as a result of such violence. The most dangerous violence is not visible. When we realize the motives of psychic harassment we emancipate from it. Marie-France Hirigoyen analyses the mechanisms of couple violence citing a lot of examples.

Marie-France Hirigoyen was born in 1949 in France. Having doctor’s degree in medicine, she is a psychiatrist, psychoanalyst and psychotherapist specialised in mobbing, a form of bullying. Her interest in stress led her in the mid-1980s into victimology, a branch of criminology. She later turned her attention to workplace stress generated by mobbing behaviour.
Her publications include "Moral Harassment: The Perverse Violence of Daily Life" ("Le harcèlement moral, la violence perverse au quotidien"), which sold 450,000 copies in her native country and was translated and sold in 24 other countries, not excluding Bulgaria (Colibri, 2001).

The Man Who Wanted to Be Happy
Laurent Gounelle

If Only I'd Listen to Myself
Jacques Salomé