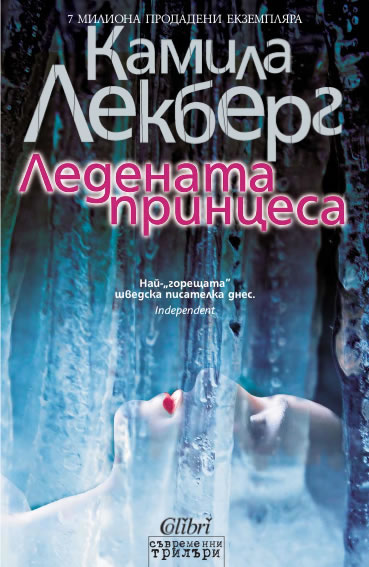 The Ice Princess, as Lackberg’s other books, takes place in the small town of Fjällbacka. In an interview, Camilla Lackberg says that “It’s a place I know very well. I think a small town is more interesting and dynamic than a big city. It’s the setting that gives the flavor.” Läckberg says the town’s history has shaped its inhabitants – and her characters. “The people there don’t take things for granted and always want to be one step ahead of fate. I try to bring that out in my books as well,” she says. And she certainly does in The Ice Princess.

When writer Erica Falck returns to her hometown after the funeral of her parents, she finds her childhood friend Alex dead, possibly murdered. Her wrists are slashed, her body frozen in an ice-cold bath. At first, is seems that she has taken her own life. Lackberg paints a portrait of a small, closed community where everybody knows everything about each other and where appearances are of immense importance. Under the wrong circumstances, this may lead to tragedy.

Local police detective Patrik Hedstrom and his colleges at the Tanumshede police station investigates the case. Detective Hedstrom follows his own suspicions about the case. Meanwhile, Erica conceives a memoir about the beautiful but remote Alex, one that will help to overcome her writer’s block as well as answer questions about their own past.

But it is only when they start working together that the truth begins to emerge about this small town with a deeply disturbing past. There is more to little Fjallbacka than meets they eye, and many secrets some of the people there would have preferred to remain buried.

Patrik and Erica are interesting characters, and this first meeting with them is important to the understanding of the series. The plot is very good, almost Agatha Christie-ish. The characters emerge with clarity and feel genuine. And Lackberg gradually lets secrets about the little community be revealed that builds suspense.The Ice Princess shows Lackberg’s ability to work with emotional responses and her considerable psychological insight. In The Ice Princess she builds like a master.