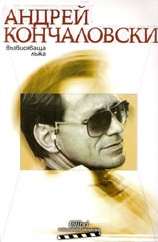 This is the sequel to “Low truths” by Andrey Konchalovsky. The book traces more closely his professional carrier in the Russian cinema, in Hollywood and also his work as a theater and opera director.

“I love myself. To be frank, I just adore myself. I don’t know for what. Maybe for being clever, talented, handsome. Newspapers write about my smile: dazzling, Hollywood. It’s really a Hollywood smile. The teeth are not mine. And if I smile wider, I can see in the mirror that the teeth which are natural, which are mine, have become yellow and look out of weak gums like those of Kholstomer horse.
The mirror does not show everything. You can see yourself from the front. But if you look in the second mirror which a hair-dresser brings to the back of your head demonstrating new hair-cut, it shows the loom of treacherous bold patch becoming clearly visible. This means that I should grow my hair longer in order to cover this damned thing. It would be good to forget about it at all. How fortunate it is that you can’t see yourself from the back! If you look in the mirror at yourself naked, again, you can see nasty wrinkles at the waist. And you make a mental note: you shouldn’t fold so that those wrinkles wouldn’t come out. People always try to imagine themselves the way they were at twenty, although they are far not twenty-year old… Tell me, tell me, my mirror… No, the mirror will never tell the truth”.

Born to an aristocratic family of Mikhalkovs with centuries-old artistic and aristocratic roots, Andrei changed his first name to Andron and took his maternal grandfather's surname as a pseudonym. He is the brother of Nikita Mikhalkov and the son of Sergei Mikhalkov.

He studied for ten years at the Moscow Conservatory, preparing for a pianist's career. In 1960, however, he met Andrei Tarkovsky and co-scripted his movie Andrei Rublev (1966). His first full-length feature, The First Teacher (1964), was favourably received in USSR and screened by numerous film festivals abroad. His second film, Asya Klyachina's Story (1967), was suppressed by Soviet authorities. When issued twenty years later, it was acclaimed as his masterpiece. Thereupon, Konchalovsky filmed adaptations of Ivan Turgenev's A Nest of Gentle Folk (1969) and Chekhov's Uncle Vanya (1971), with Innokenty Smoktunovsky in the title role. His epic Siberiade upon its 1979 release was favourably received at Cannes and made possible his move to the United States in 1980.

His most popular Hollywood releases are Runaway Train (1985), based on Kurosawa's original script, and Tango & Cash (1989), starring Sylvester Stallone and Kurt Russell. In the 1990s Konchalovsky returned to Russia, although he occasionally produced historical films for U.S. television, such as the spectacular The Odyssey (1997) and the award-winning The Lion in Winter (2003).

Konchalovsky's latest full-length feature, House of Fools (2003, with a cameo role by Bryan Adams playing himself) set in a Chechen psychiatric asylum during the war, won him a Silver Lion at the Venice Film Festival.

Konchalovsky has been married multiple times. His first wife was Kazakh actress Natalia Arinbasarova, with whom he has two sons: Yegor, born January 15, 1966, and Stepan. His second wife was Irina Kandat. His third wife was Viviane Godet, with whom he has a daughter, Alexandra Mikhalkova, born October 6, 1971.

After he came to America, while being jobless, he lived with Shirley MacLaine, then left her for Nastassja Kinski, who helped him secure a contract with producer Menahem Golan for Maria's Lovers.

His current wife is the Russian actress Yuliya Vysotskaya.