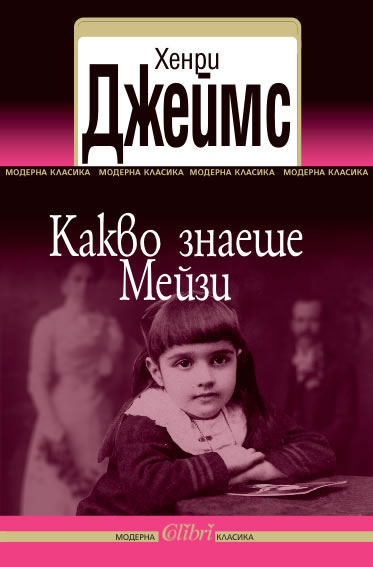 What Maisie Knew is a novel by Henry James, first published as a serial in the Chap-Book and (revised and abridged) in the New Review in 1897 and then as a book later in the same year. The story of the sensitive daughter of divorced and irresponsible parents, What Maisie Knew has great contemporary relevance as an unflinching account of a wildly dysfunctional family. The book is also a masterly technical achievement by James, as it follows the title character from earliest childhood to precocious maturity.

When Beale and Ida Farange are divorced, the court decrees that their only child, the very young Maisie, will shuttle back and forth between them, spending six months of the year with each. The parents are immoral and frivolous, and they use Maisie to intensify their hatred of each other. Beale Farange marries Miss Overmore, Maisie's pretty governess, while Ida marries the likeable but weak Sir Claude. Maisie gets a new governess, the frumpy, more than a little ridiculous, but devoted Mrs. Wix.

Both Ida and Beale soon busy themselves with other lovers besides their spouses. In return those spouses — Sir Claude and the new Mrs. Beale — begin an affair with each other. Maisie's parents essentially abandon her in heartbreaking scenes, and she becomes largely the responsibility of Sir Claude. Eventually, Maisie must decide if she wants to remain with Sir Claude and Mrs. Beale. In the book's long final section set in France, the now teenaged Maisie maturely decides that the relationship of her new "parents" might well end as badly as that of her biological parents. She leaves them and goes to stay with Mrs. Wix, her most reliable adult guardian.

What Maisie Knew has attained a fairly strong critical position in the Jamesian canon. Edmund Wilson was one of many critics who admired both the book's technical proficiency and its judgment of a negligent and damaged society. When Wilson recommended What Maisie Knew to Vladimir Nabokov, the author of Lolita, Nabokov thought the book was terrible. F.R. Leavis, on the other hand, declared the book to be "perfect".

The way James convincingly follows the growth of Maisie's consciousness from its first faint glimmerings of awareness to its final comprehensive understanding of her situation has usually earned great respect. Though a lifelong bachelor, James was good at portraying children in tales like Turn of the Screw; this book shows his ability to enter into the trials, fears and joys of a child's existence.

Henry James, OM (15 April 1843 – 28 February 1916) was an American-born writer, regarded as one of the key figures of 19th-century literary realism. He was the son of Henry James, Sr., a clergyman, and the brother of philosopher and psychologist William James and diarist Alice James.

James spent the last 53 years of his life in England, becoming a British subject in 1915, one year before his death. He is primarily known for the series of novels in which he portrays the encounter of Americans with Europe and Europeans. His method of writing from the point of view of a character within a tale allows him to explore issues related to consciousness and perception, and his style in later works has been compared to impressionist painting.

James contributed significantly to literary criticism, particularly in his insistence that writers be allowed the greatest possible freedom in presenting their view of the world. James claimed that a text must first and foremost be realistic and contain a representation of life that is recognisable to its readers. Good novels, to James, show life in action and are, most importantly, interesting. The concept of a good or bad novel is judged solely upon whether the author is good or bad. His imaginative use of point of view, interior monologue and possibly unreliable narrators in his own novels and tales brought a new depth and interest to narrative fiction. An extraordinarily productive writer, in addition to his voluminous works of fiction he published articles and books of travel, biography, autobiography, and criticism, and wrote plays, some of which were performed during his lifetime with moderate success. His theatrical work is thought to have profoundly influenced his later novels and tales.