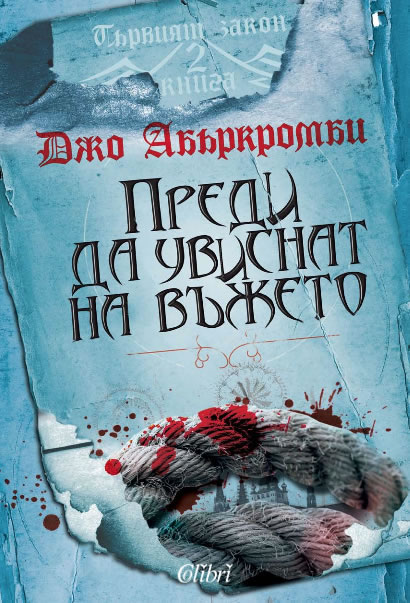 Before They Are Hanged

Before They Are Hanged by Joe Abercrombie is the second book in the First Law trilogy, the first being The Blade Itself (The First Law: Book One). The third, and final book, Last Argument of Kings is scheduled for release in the United States in September, 2008. The First Law Trilogy is not your run of the mill, cliché ridden fantasy series. It is dark, twisted, and unlike most of the `traditional' fantasy books being published.

The plot, or should I say plots, of this book pick up right after The Blade Itself. There are three separate plots, that center on separate characters or a group of characters. There is the plotline of a character trying to hold a city under siege and the measures he undertakes to keep the city from falling. There is a plot revolving around a group of characters seeking an artifact to aid them in a greater task, I won't say anymore about that because of spoilers. Lastly, there is a plot about the pending invasion by the Northmen and how the Union soldiers can combat the attack. These are the three plot lines that essentially tie the book together, however, there are countless subplots woven into the book as well. There is a great deal of political underpinnings in two of the three plot lines as well as betrayal and other manners of one-up man ship between a couple characters.

The characters in this novel are essentially the same characters that were present in the first novel. Some of the returning characters are Glokta, Logen Ninefingers, Bayaz, Ferro, Jezal, and Colonel West among others. They are all complex characters and most, if not all, go through a great deal of character development in this novel. One of my complaints of the previous novel was that a couple characters came across as forced or contrived. That notion never crossed my mind with this novel. Rather, a couple of the characters go through quite an overall transformation due to their ordeals, such as West and Jezal. The characters in this book are top notch, they are gritty, rough, crass and real. If you are looking for light, happy characters that you can laugh with, look at a different book. I was rather impressed by the amount of character development in this book. Granted, some characters do not get a lot of character progression, but they all grow in some way or another. Whether it is a character realizing something about themselves due to an injury the incur or a character growing a backbone, to a character beginning to show a softer side of themselves to a select few people.

In The Blade Itself, it seemed Mr. Abercrombie had a few, shall we say growing pains. However, in this novel, there seems to be an exponential growth in both his writing and his overall story. If this type of growth continues with the next novel (and any future stories after that) I think readers will be more than pleased.

The only criticism I have of this novel is there is one particular character, Glotka, who has a great deal of what can only be described as internal dialogue. This holds true to the first book as well, but when I read the internal dialogue it just doesn't work very well for me. This may be a personal bias of mine, since I do not care for first person books. Some of the internal dialogue is fine, but there are points in the novel where it seems over used.

Where The Blade Itself seemed like a setup for future events, in Before They Are Hanged events occur at almost a frenetic pace leaving the reader little time to stop and catch their breath. Mr. Abercrombie seems to almost dare the reader to try and put down the book. The prose in this novel seems more refined and polished. The flow and pacing seem more natural and, at least to me, seemed easier to grasp and understand. This could very well be due to having the first novel under my belt already.

The First Law trilogy seems to be taking on the mantel of a fine painting. Taken piece by piece each book is solid. However, taken as a whole, as the entire trilogy, the true beauty of this work begins to stand out.

Overall, I think this is a marked improvement over the first novels minor flaws. If you are a fan of the fantasy genre and are seeking a solid adult fantasy novel, then by all means look no further than this trilogy. Although, you really need to start with the first book if you are to understand the events in this book. With Before They Are Hanged, Mr. Abercrombie has established himself as one of the new voices of the fantasy genre that will be around for many years to come. I can easily see myself recommending this trilogy to many people in the future.