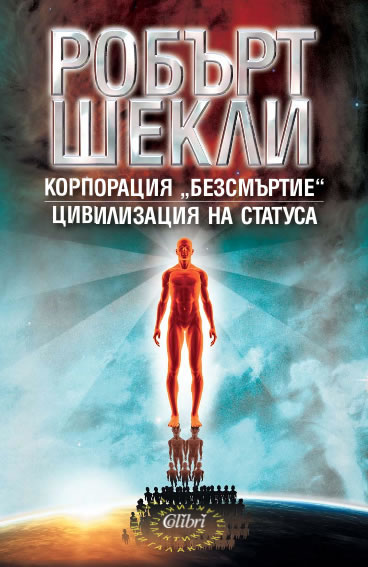 Immortality, Inc. is a 1958 science fiction novella by American writer Robert Sheckley, about a fictional process whereby a human's consciousness may be transferred into a brain-dead body. The serialised form (published under the title Time Killer in the magazine Galaxy Science Fiction) was nominated for the Hugo Award for Best Novel. The novel's basic premise was adapted for the film Freejack in 1992.

The Status Civilization is a science fiction novel by Robert Sheckley, first published in 1960. It concerns Will Barrent, a man who finds himself, without memory of any crime or, indeed, of his previous life, being shipped across space to the planet Omega.

Omega, used to imprison extreme offenders, has a hierarchical society of extreme brutality, where the only way to advance (and avoid dying) is to commit an endless series of crimes. The average life expectancy from time of arrival on Omega is three years. The story concerns Barrent's attempt to survive, escape, and return to Earth to clear himself of the accusations against him.

Robert Sheckley (July 16, 1928 – December 9, 2005) was a Hugo- and Nebula-nominated American author. First published in the science fiction magazines of the 1950s, his numerous quick-witted stories and novels were famously unpredictable, absurdist and broadly comical. Sheckley was given the Author Emeritus honor by the Science Fiction and Fantasy Writers of America in 2001.