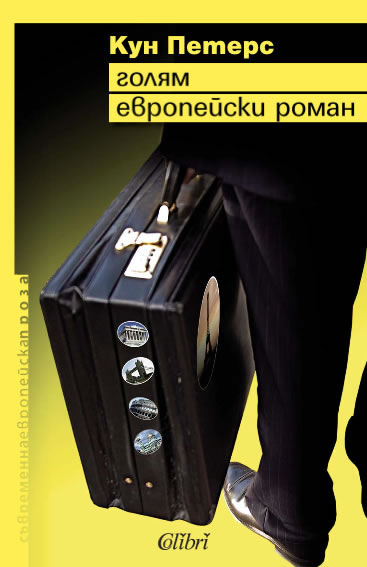 Finally. After the Great American Novel we can now read the Great European Novel. A book with as many chapters as there are European capital cities. A biting quest for happiness. The Great European Novel describes how we, strangers, can find each another anyway in conference centres, airports and hotels. How we, Europeans, feel each other out with language. How some secrets can only be confided to people we’ve never met before or to people we’ll never meet again.

Robin is looking for all-consuming love, Theo is being driven along by his past. They work in marketing, advertising, promotional gifts. And Theo is Robin’s boss. One more contrast: Robin is promising and impatient, Theo is the wise, sad boss who has had everything. Yes, everything. They are businessmen. But ever since the Nine Eleven television pictures, showing ordinary office employees in New York covered in ashes or being lost in them, they are heroes.

In Prague Robin meets a golem, in Budapest he goes for a swim, in Warsaw he sleeps with Agnieszka. In Brussels Robin finally meets the one and only. The one and only? Yes, he finds the one and only in a volcanic way. In the meantime Theo’s secret is being revealed slowly but surely: an old war story. While the world is a flourishing place for Robin, it is slowly and tragically closing in on Theo.

Koen Peeters was born on March 9th, 1959. The Flemish writer was awarded with the Nieuwe-Yangprijs for his debut Conversaties met K. Following that debut he wrote amongst others Bezoek onze kelders, De postbode (NCR-Prijs), Het is niet ernstig, mon amour (Prijs voor Letterkunde of the province Vlaams-Brabant), Acacialaan (longlist AKO Literatuurprijs) and Mijnheer Sjamaan. In 2005 his highly-praised poetic debut Fijne motoriek was published. Peeters has won the prestigious F. Bordewijkprijs 2010 for his novel 'The Flowers'. The prize goes to the writer of the best fictional novel in Dutch. Peeters is also in the running for the AKO-Literature Prize.