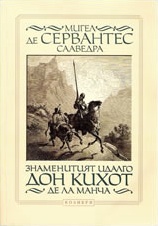 Don Quixote is universally regarded as Cervantes' masterwork and one of the greatest novels of all time.

The novel is actually two separate books that cover the adventures of Don Quixote, also known as the knight or man of La Mancha, a hero who carries his enthusiasm and self-deception to unintentional and comic ends. On one level, Don Quixote works as a satire of the romances of chivalry which ruled the literary environment of Cervantes' time. However, the novel also allows Cervantes to illuminate various aspects of human nature by using the ridiculous example of the delusional Quixote.

Cervantes felt a passion for the vivid painting of character, as his successful works prove. Under the influence of this feeling, he drew the natural and striking portrait of his heroic Don Quixote, so truly noble-minded, and so enthusiastic an admirer of every thing good and great, yet having all those fine qualities, accidentally blended with a relative kind of madness; and he likewise portrayed with no less fidelity, the opposite character of Sancho Panza, a compound of grossness and simplicity, whose low selfishness leads him to place blind confidence in all the extravagant hopes and promises of his master. The subordinate characters of the novel exhibit equal truth.

Were it not for the happy art with which Cervantes has contrived to preserve an intermediate tone between pure poetry and prose, Don Quixote would not deserve to be cited as the first classic model of the modern romance or novel. It is, however, fully entitled to that distinction. Cervantes was the first writer who formed the genuine romance of modern times on the model of the original chivalrous romance, that equivocal creation of the genius and the barbarous taste of the Middle Ages. The result has proved that modern taste, however readily it may in other respects conform to the rules of the antique, nevertheless requires, in the narration of fictitious events, a certain union of poetry with prose, which was unknown to the Greeks and Romans in their best literary ages. It was only necessary to seize on the right tone, but that was a point of delicacy, which the inventors of romances of chivalry were not able to comprehend. Diego de Mendoza, in his Lazarillo de Tormes, departed too far from poetry. Cervantes, in his Don Quixote restored to the poetic art the place it was entitled to hold in this class of writing; and he must not be blamed if cultivated nations have subsequently mistaken the true spirit of this work, because their own novelists had led them to regard common prose as the style peculiarly suited to romance composition.

Don Quixote is, moreover, the undoubted prototype of the comic novel. The humorous situations are, it is true, almost all burlesque, which was certainly not necessary, but the satire is frequently so delicate, that it escapes rather than obtrudes on unpractised attention; as for example, in the whole picture of the administration of Sancho Panza in his imaginary island. The language, even in the description of the most burlesque situations, never degenerates into vulgarity; it is on the contrary, throughout the whole work, so noble, correct and highly polished, that it would not disgrace even an ancient classic of the first rank. This explanation of a part of the merits of a work, which has been so often wrongly judged, may perhaps seem belong rather to the eulogist than the calm and impartial historian. Let those who may be inclined to form this opinion study Don Quixote in the original language, and study it rightly, for it is not a book to be judged by a superficial perusal. But care must be taken lest the intervention of many subordinate traits, which were intended to have only a transient notional interest, should produce an error in the estimate of the whole. By the 20th century the French writer Dominique Aubier discovers that Don Quixote was the first true modern novel, a systemical and structural masterpiece in fact coded in kabalistic keys.

Miguel de Cervantes Saavedra, Spain's greatest literary figure, was born in Alcalá de Henares, a small university town near Madrid, where he was baptized in the church of Santa María on October 9, 1547; he died in Madrid on April 23, 1616. We know little of his early life. The fourth of seven children, Cervantes, his siblings and mother accompanied his father, an itinerant surgeon, who struggled to maintain his practice and his family by traveling the length and breadth of Spain. Despite his father's frequent travels, Cervantes received some early formal education, in the school of the Spanish humanist, Juan Lopez de Hoyos, who was teaching in Madrid in the 1560s. His first literary efforts - poems written on the death of the wife of Philip II - date from this period.

In 1569 Cervantes traveled to Italy to serve in the household of an Italian nobleman, and joined the Spanish army a year later. He fought bravely against the Turks at the Battle of Lepanto in 1571, where he received serious wounds and lost the ability to use his left hand. After a lengthy period of recovery and further military duty, he departed Italy for Spain in 1575, only to be captured during the return journey by Barbary pirates. He was taken to Algiers and imprisoned for five years, until Trinitarian friars paid a considerable sum of money for his ransom. This experience was a turning point in his life, and numerous references to the themes of freedom and captivity later appeared in his work.

His new-found freedom and return to Spain had strings attached. He was deep in debt for the ransom paid to release him. In 1584 he married a woman almost twenty years younger (he was 37 at the time), and soon managed to obtain a position as a government official in the south of Spain, requistioning wheat and olive oil for the campaign of the Invincible Armada (1588). Within two years of the Armada's defeat, he requested permission to emigrate to the New World, most likely to improve his situation, but was turned down and told to find some gainful employment "at home."

By 1590, Cervantes was already known as a promising author. In 1585 he published his first work in prose, "La Galatea", a pastoral romance which had attracted qualified praise from some of his contemporaries. He was also writing for the theater. At this time he also began to write short stories, some of which were later included in his "Exemplary Tales". His most famous work, "Don Quixote de la Mancha", was published in two parts in Madrid. Part I appeared in 1605; the second part in 1615. The novel was an immediate success. The first part went through six editions the year of its publication, and was soon translated into English and French. The fame of Don Quixote brought Cervantes to the attention of a wide audience. His final prose fiction, "The Travails of Persiles and Sigismunda", generally described as a Byzantine romance - whose dedication he finished four days before his death - was assessed by Cervantes as among the best of his work.