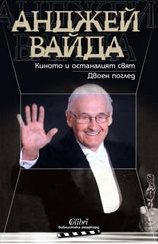 Cinema and the Rest of the World. Double Vision

The book Cinema and the Rest of the World is a reflection upon Wajda's life as well as an attempt at understanding its connections with the artist’s work. Written just before he received the Academy Award, it chronicles the making of his most recent films as well as his views on the developments in world cinema. What is more, Wajda discloses some hereto unknown details of his life and talks about his lifelong fascination with Japanese film and culture.

"I am often asked why it was Japan that attracted my special interest. Why was it, when I had so many different options available, that my attention turned towards that distant land?

The answer’s simple, I think. In Japan I met people my heart goes out to. I don’t speak their language, and I’ve got a very rough idea about their customs, but I think I know them well. They have all those qualities which all my life I wanted to develop and nurture in myself: gravity, a sense of responsibility and honour, and a need for tradition. Thanks to my encounter with Japan I know that these beautiful attributes don’t just exist in my imagination. I know that they really exist."

In 2000 Andrzej Wajda, “one of the most respected filmmakers of our time, a man whose films have given audiences around the world an artist’s view of history, democracy and freedom, and who in so doing has himself become a symbol of courage and hope for millions of people in post-war Europe,” was bestowed with an Honorary Award by the Board of Governors of the Academy of Motion Picture Arts and Sciences. He graduated from the National Film School in Łódź in 1954 and established himself as a key figure in the new Polish cinema. Wajda’s filmography includes 44 films he directed, three of which have been nominated by the Academy for Best Foreign Language Film: Land of Promise in 1975, The Maids of Wilko in 1979 and Man of Iron in 1981.