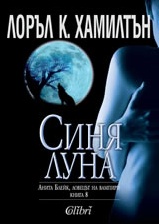 Anita Blake makes a living raising the dead. She also executes rogue vampires and villains among the local were-folk. Marks bind her to Jean-Claude, the Master vampire of St. Louis and her lover, and to her ex-fiancé, a powerful werewolf who heads up the local pack. Anita shares some of their magic, and her own power over the dead keeps growing. But so does the body count and the situations that force Anita to bend or break her own rules.

In Blue Moon, Anita's ex Richard is jailed in Tennessee, accused of rape. When Anita arrives with a lawyer and an entourage of vampires and 'weres' supplied by Jean-Claude, it's clear that something is rotten in Myerton. The local cops are corrupt, and the trolls Richard was studying are threatened. But if she sticks around to investigate, the local Master vampire will attack her and her friends. The local werewolf clan isn't rushing to welcome her either, and her self-control is going to the, um, wolves.

Blue Moon is the eighth book in Hamilton's Anita Blake: Vampire Hunter series; newcomers should start with earlier books. The protagonists' development and their relationships to each other and to the large cast of continuing secondary characters are what make these books so compelling. Be warned -- there's steamy sex and graphic violence here, though Anita does reflect on her moral position. But if dark urban fantasy featuring those who hunt the night appeals, pounce on this series. -- Nona Vero

Laurell Hamilton (1963), an American fantasy and romance writer, who is best known for her two series of novels: “Anita Blake: Vampire Hunter”, which runs to nineteen novels and a number of short story collections and other tie-in media such as comic books; and - “Merry Gentry”, which contains eight novels.

More than six million copies of the “Anita Blake” series have been printed and it became a New York Times bestseller. The series has been translated into sixteen languages.

The “Merry Gentry” series of novels is an urban fantasy in which the world of fairy interacts with the “real world”.