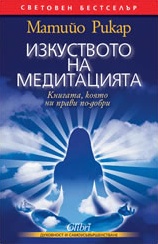 The Art of Meditation

A number one bestseller in France, this is an elegant and inspiring short guide to the art of meditation: another instant classic from the bestselling author of Happiness. Wherever he goes, Buddhist monk Matthieu Ricard is asked to explain what meditation is, how it is done and what it can achieve. In this elegant, authoritative and entirely accessible book, he sets out to answer these questions. Although meditation is a life-long process even for the wisest, "The Art of Meditation" demonstrates that by practicing it on a daily basis we can change our understanding of ourselves and the world around us. In this brilliant short book, Matthieu Ricard talks us through the theory, spirituality and practical aspects of meditation. He illustrates each stage of his teaching with examples and pictures, leading the reader deeper into their own practice. Through his experience as a monk, his close reading of sacred texts and his deep knowledge of the Buddhist masters, Matthieu Ricard shows the significant benefits that meditation, based on selfless love and compassion, can bring to each of us.

Categories
PsychologySelf-HelpSelf-Help and Psychology Series
About the Author

Born in Aix-les-Bains, Savoie, France, he is the son of the late Jean-François Revel (born Jean-François Ricard), a renowned French philosopher, and grew up among the personalities and ideas of French intellectual circles. He first travelled to India in 1967.

He worked for a Ph.D. degree in molecular genetics at the Institut Pasteur. After completing his doctoral thesis in 1972, Ricard decided to forsake his scientific career and concentrate on the practice of Tibetan Buddhism. He lived in the Himalayas studying with the Kangyur Rinpoche and some other great masters of that tradition and became the close student and attendant of Dilgo Khyentse Rinpoche until his passing in 1991. Since then, Dr. Ricard has dedicated his activities to fulfilling Khyentse Rinpoche’s vision.