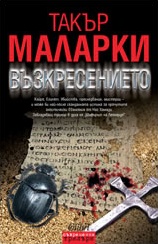 Resurrection draws on actual events surrounding the discovery of the Lost Gospels of Nag Hammadi. Suppressed by officials of the early Church, these sacred texts disappeared nearly two thousand years ago and were rediscovered unexpectedly in the 1940’s in the desert south of Cairo. Around these remarkable events, Tucker Malarkey has crafted a suspenseful and eye-opening tale of love and war, religion and murder.

When Gemma Bastian receives a telex that her archaeologist father has been found dead in Cairo, she flies from ravaged post-World War II London to Egypt to bury his ashes and close his affairs. While staying at the home of her father’s oldest friend in Cairo, Gemma finds nothing is as it seems. She is both helped and hindered by David Lazar’s handsome enigmatic sons, half brothers who appeal to different parts of her war-weary heart.

As Gemma sifts through her father’s office at the Egyptian Museum, she is soon aware that her movements do not go unnoticed; she is being watched by at least one man who wants something her father had. As she stumbles upon clues to her father’s last and most closely guarded project, she becomes convinced that his death was not natural, and that he was involved in a great archaeological discovery, one that many want to stay buried, one that might change the Christian world forever.

Torn between brothers, beset by ominous warnings and threats to her safety, Gemma presses on in her investigation, finding herself caught in an intricate web of belief and betrayal in which she is fighting to rebuild not only her own shattered life but a faith that was lost to all of humanity. Here is the story of resurrection in its many forms: of a dead father, of a love between and man and a woman, of a world ravaged by war, of a faith that might have been.

Tucker Malarkey was raised in San Francisco. She attended Georgetown University and was then hired by the Washington Post where she spent the next four years working on the Foreign Desk and then with columnist Haynes Johnson on the book, SLEEPWALKING THROUGH HISTORY, a best-selling account of the Reagan years. Before accepting a magazine job in New York, she decided to go to Africa for three months, visiting an island off the coast of Kenya where there were no cars and only the occasional phone; a place that seemed ideal for figuring out a life plan. The trip that was to last three months lasted two years. Much of the first year was spent on the aforementioned island, where she taught Moslem boys in a broken down school house with dirt floors and decided her life plan would involve writing fiction.

From the island (the setting for AN OBVIOUS ENCHANTMENT) she traveled to South Africa, where Nelson Mandela had just been released. The country was experiencing a euphoric optimism about the future and Ms. Malarkey stayed on to teach English in the townships outside of Capetown while continuing to support herself with freelance magazine work. Because African countries were then penalizing those who stayed in South Africa longer than two months, Ms. Malarkey was denied re-entry to Kenya. She did not return to the island for five years.

Upon returning to America, she was admitted to the Iowa Writers Workshop where she began a novel for which she received a Michener Grant in 1994. She spent the next few years teaching and working on various literary projects between Portland and New York City, while at work on a second novel. She currently teaches writing workshops in Portland's public school system and is the Editor-at-Large for TIN HOUSE magazine, a literary journal based in Portland and New York. She is at work on her third novel.