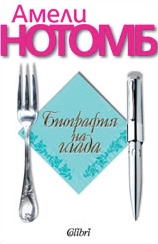 The Life of Hunger

Amelie Nothomb has written several novels grounded firmly in autobiography, but these all focus on a relatively short time-span, a few years of her life. Though The Life of Hunger accelerates rapidly once the narrator reaches adolescence, the book is considerably broader, covering Nothomb's life (or the life of a very Nothomb-like protagonist) from childhood through her early twenties.

As the title suggests, The Life of Hunger is a book about hunger. An appetite -- enormous and desperate -- defines the narrator, from an early age: "I am hunger". It's more powerful than her, "a desire greater than desire", and to indulge in it is her greatest goal. She posits the concept of "surfaim" (borrowing from Nietzsche's concept of a Superman, "surhomme"), a hunger beyond what is familiar as hunger. If anyone has it, she does.

It's not just food, or food in general: there are specific things she lusts after. Sugar, for one, but also simply water, which she guzzles incredible amounts of. Among the best and most telling scenes is when she gets some sweets in Beijing (where they are hard to come by), and she sits down in front of the mirror to watch herself eat, doubly indulging in (and thus also heightening) her ecstatic pleasure. (Yes, she's one strange little girl.)

The pre-pubescent body can still handle all this excess (helped, no doubt, by the fact that true excess was only occasionally possible, especially in the Beijing of the early 1970s), but already then it takes more dangerous turns. Alcohol, for example, is a discovery and temptation, and becomes a habit before she's ten.

The Life of Hunger is far from being focussed exclusively on the narrator's appetites; indeed, after the early emphasis on it, introducing this as a defining part of her character, it becomes less prominent.

Biographie de la faim is presented, like many Nothomb novels, in very short chapters. There are specific episodes, but also many more general descriptions, as life in Laos or elsewhere are summed up in a few sentences. The text complement the previous autobiographical works, adding useful background to, for example, Fear and Trembling, as well as revealing some of what happened in the years not yet covered in other fictions. (But there's still a good deal of room for separate New York, Bangladesh, and Burma novels from her .....)

The mix of humour, philosophising (of sorts), and odd stories (from the plain domestic to the fantastic -- like the elephant she got for her birthday) makes for a wonderful read.

Nothomb's success -- here as often elsewhere -- is in the portrayal of the precocious child. She gets the tone, the confidence, the limited view and understanding of the world of the child down perfectly. And the girl is an endearing rather than annoying precocious; it seems entirely believable that she was loved as much and as passionately as she claims. Significantly, Nothomb doesn't revel in childhood-innocence (like so many nostalgic authors do); but she takes the feelings of childhood as seriously as anyone ever has, understanding that love and hurt can mean more at that age than ever later in life.

Despite the focus on childhood, and the deceptively simple presentation, Nothomb's books are mature works. Hers is an adult voice and understanding, and here she ventures further and tries more than previously. She also still has a ways to go: where Loving Sabotage is near-perfect in its limited story (her years in Beijing), Biographie de la faim gets too loose during the character's teenage years, as if Nothomb set out but then saw she wasn't quite prepared to confront those years head on. Still, this is among her finest achievements.

Unlike her previous works, The Life of Hunger is not described as a novel on the cover -- but it's also not presented as an autobiography. It can certainly be read as a memoir, but is probably not much more (or less) so than, for example, Loving Sabotage.