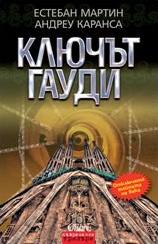 In the tradition of The Da Vinci Code, this mix of thriller and adventure tale set in Barcelona centers on the life and work of real-life architect Antonio Gaudi (1852–1926) and his largest project, La Sagrada Familia, a Catholic church that remains unfinished. Readers who enjoy heavy doses of religious history, mysticism, and secret societies will revel in the detailed backstory, which follows the 3,000-year life of a sacred relic guarded by a secret order, the Knights of Moriah, against the Corbel, an equally secret satanic sect. Maria and her boyfriend, Miguel, both academics, are drawn into the dangerous game when Maria’s grandfather dies, leaving her to find the hidden relic and fulfill the prophecy. The realistic characters and the intriguing combination of religion and architecture will draw readers, but the uneven pace may deter them. The first two-thirds of the novel is very slow—nearly brought to a standstill by lengthy flashbacks—but the last third abruptly kicks into overdrive, as the body count grows and frenzied action dominates. This narrative schizophrenia is disconcerting, but Da Vinci Code fans are used to bipolar pacing. --Jessica Moyer

Esteban Martin is an anthropologist and author, and a founder of Littera, a small publishing house.