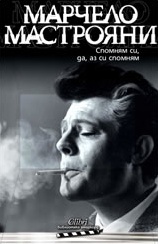 This is a book based on the film under the same title with Mastroianni starring in. These are notes of his voice recorded.

Mastroianni is not so much a subject as a host in the tour of his life, regaling the audience with anecdotes and pondering his career with a seriousness leavened by an amiable self-deprecation. We wander through his career on the stage with an array of stills and a few rare recordings, and his career in the cinema with a bounty of generous clips (which are, frustratingly, unidentified on screen) and a smattering of behind-the-scenes footage. I Remember is hardly probing or analytical, and the most controversial statement you'll find is Mastroianni's repudiation of the "Latin lover" label ("a crazy, stupid idea. It cheapens me"). What you get is a glimpse of his often overlooked range of projects and parts; engaging stories about such directors as Federico Fellini, Luchino Visconti, and Vittorio De Sica; and the offbeat sensibility of an actor who delighted in parodying his image (his dream projects, he confesses, are playing an old Tarzan and a deaf mute in a wheelchair: "to pander to my laziness... maybe I'd even win an Oscar"). At over three hours, the film takes its own lazy time, but that tongue-in-cheek charmer Marcello is a relaxed, amiable, inviting personality, good company and a delightful storyteller. --Sean Axmaker

Marcello Vincenzo Domenico Mastroianni (28 September 1924 – 19 December 1996) was an Italian film actor. His honours have included British Film Academy Awards, Best Actor awards at the Cannes Film Festival and 2 Golden Globe Award. He was a famous actor in Italy and all around the world.