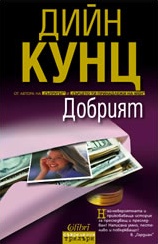 A guy walks into a bar and is mistaken for a hired killer. He tries to pay off the REAL killer and, for a time, it seems as if this will work. But the killer catches on and so the chase starts, as "the good guy" tries to save a beautiful woman from death.

In addition to the intrigue, she has no idea why anyone would want her killed. Neither does he, of course. So they have to keep running from the guy who seems to be almost psychic, a man with connections that run deeper than could ever be expected.

The subtle details Koontz adds are what separates him from other, less skilled writers. His writing is also tight, tense and neither stereotypical nor too dense. Take this one with you this summer or have it on hand for times when you want a good read. You won't be disappointed!