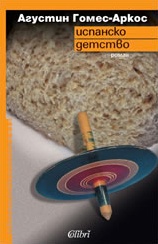 “Spanish Childhood” (1987) is the story of a republican family living in a small village in Andalusia. It spans the period after the Spanish Civil War.

Agustin Gomez-Arcos (1939-1998) was a Spanish writer. He was born in Enix, Spain. He studied law but quit university for theatrе. Some of his work was banned in Franco's Spain. He emigrated to France in 1966 and wrote primarily in French, often with themes condemning the fascist Spanish state. He died of cancer in Paris.