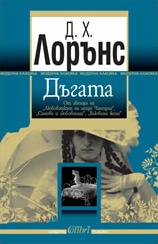 The Rainbow is a 1915 novel by the British author D. H. Lawrence. It follows the stories of three generations of the Brangwen family, particularly focusing on the sexual dynamics of, and relations between, the characters.

Lawrence's frank treatment of sexual desire and the power it plays within relationships as a natural and even spiritual force of life, though perhaps tamed by modern standards, caused The Rainbow to be prosecuted in an obscenity trial in late 1915, as a result of which all copies were seized and burnt. After this ban it was unavailable in Britain for 11 years, although editions were available in the USA.

In 1989, the novel was adapted into the UK film The Rainbow, directed by Ken Russell who also directed the 1969 adaptation of the sequel Women in Love.

David Herbert Richards Lawrence (1885–1930) was an English author, poet, playwright, essayist and literary critic. His collected works represent an extended reflection upon the dehumanising effects of modernity and industrialisation. In them, Lawrence confronts issues relating to emotional health and vitality, spontaneity, human sexuality and instinct.

Lawrence's opinions earned him many enemies and he endured official persecution, censorship, and misrepresentation of his creative work throughout the second half of his life, much of which he spent in a voluntary exile he called his "savage pilgrimage". At the time of his death, his public reputation was that of a pornographer who had wasted his considerable talents. Lawrence is now valued by many as a visionary thinker and significant representative of modernism in English literature, although feminists have a mixed opinion to the attitudes toward women and sexuality found in his works.