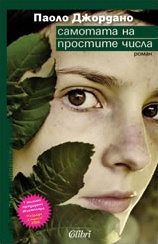 The Solitude of Prime Numbers

"The Solitude of Prime Numbers", Giordano's first novel, took Italy by storm where it has sold over a million copies. It was translated into thirty languages and has been selling all over the world.

Paolo Giordano narrates the childhood and young adult life of a boy, Mattia, and a girl, Alice, both of whom had exposure to traumatic situations very early in life. Alice bears the physical scars of a terrible skiing accident which nearly killed her. Mattia bears the emotional scars of having lost his disabled twin sister, after leaving her alone in a park in order to attend his first and only birthday party. These traumas manifest themselves again physically later in both of their lives, with Alice being anorexic, and Mattia cutting himself. At school, both are outsiders, much as prime numbers are outsiders from the other numbers. Both lonely, they befriend each other, forming a special relationship -- very close, but never romantic (the relationship is compared to prime pairs; always together, but never touching). When the gifted Mattia wins a mathematics posting that takes him thousands of miles away, their relationship appears to have run its course. But when Alice sights a woman who could be Mattia's sister, the two are brought back together again. Though they clearly love each other, they are unable to express their emotions.

Paolo Giordano was born in Turin in 1982. He is a professional physicist and is currently working on a doctorate in particle physics.