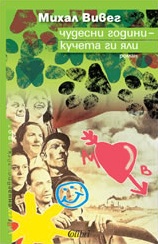 The Blissful Years of Lousy Living

The most popular Czech book of the 90's. A wildly comic story about the fate of one ordinary Czech family over the course of 20 years, from the 1960's to the present. At turns humorous, ironic and sentimental, it is an engaging portrait of their attempts to flee from the socialism – or at least to ignore it for as long as possible.

Michal Viewegh (born March 31, 1962, Prague) is one of the most popular contemporary Czech writers and the bestselling one. He writes about romantic relationships of his contemporaries with humour, and variously successful irony and attempts at deeper meaningfulness; he is sometimes compared to Nick Hornby by his fans.

His books, which since the late 1990s he publishes regularly every spring, sell over 50 000 copies, bringing him an upper-high-class income uparalleled among Czech writers (by his own boastful admissions, his royalties from a successful book are roughly 8 years' average Czech salary and his 2004 income was 4 million CZK). Viewegh likes to point out this success with readers, as well as the fact that his books have been translated into several languages and made into films, since he fell out of favour with critics in mid-1990es, which sentiment he heartily reciprocated in his following books.