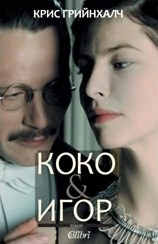 Published in 2002, the first novel of the British author Chris Greenhalgh is focused on the brief love affair between the two 20th century icons – Coco Chanel and Igor Stravinsky. The plot is set in Paris in the early decades of the twentieth century – the time when both Chanel and Stravinsky are at the beginning of a grand success.

Chris Greenhalgh is a British novelist, poet, screenwriter and teacher. Born and grown in Manchester, he mastered in English Literature and had a doctorate in post-modern American poetry. In 2002 he published his first novel “Coco Chanel and Igor Stravinsky”, based on the real-life affair between Coco Chanel and Igor Stravinsky in Paris in 1920. In 2009 the novel was filmed by Jan Kounen ("Dobermann", "Blueberry", "99 Francs”) under the same title. It was chosen as the Closing Film of the 2009 Cannes Film Festival. The novel “Coco and Igor” has been translated into twelve languages, including Greek, Polish, Russian and Chinese.

The second novel of Chris Greenhalgh - “The Cool End of Red”, is also set in Paris, like his first novel, but spans the time after the end of the Second World War and this time the story is focused on the relation between the Hollywood star Ingrid Bergman and the war photographer Robert Capa.

Chris Greenhalgh has been awarded for his poetry with The Eric Gregory Award.