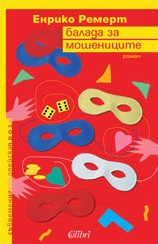 The Ballad of the Low Lifes

A film version of the novel is awaited.

Enrico Remmert was born in 1966 in Turin, Italy, where he lives and works. He has published numerous stories in literary anthologies and magazines, he has also written two novels - “Rossenotti” (1997), which won two literary awards in Italy, and “The Ballad of the Low Lifes” (2002), long-listed for the “Independent Foreign Fiction” Prize and the “IMPAC” Dublin Award.