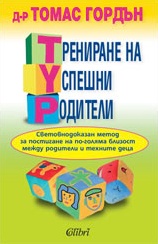 Introduced in 1962 by Dr. Gordon, "Parent Effectiveness Training", known world-wide as P.E.T., is recognized as the first skill-based training program for parents. It helps them to communicate more effectively with kids and offer step-by-step advice to resolving family conflicts so everybody wins. The program is suitable for working with children of all ages.

P.E.T. has been taught to over a million parents in forty-three countries around the world. The book was completed in 2006 with up-to-date examples, new content and more. It has been published in thirty-three languages and sold over five million copies.

Dr. Thomas Gordon was the founder of Gordon Training International Foundation and the model “Gordon” is used successfully world-wide. He has written nine books, published in 28 languages in total print of over six million copies.

Dr. Gordon has been nominated three times for the Nobel Peace Prize. In 1999 he was awarded with the Gold Medal Award of the American Psychological Foundation for enduring contribution to the field of psychology. He was also the recipient of the 2000 Lifetime Achievement Award of the California Psychological Association.

The Rose-tinted Spectacles of the Soul
Lubomir Rosenstein

And You will Find the Treasure within You
Laurent Gounelle

Being Genuine: Stop Being Nice, Start Being Real
Thomas d'Ansembourg