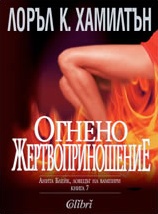 Strong beautiful, hypnotic and manipulative characters interlace in this dynamic urban story. The relations between characters are built with centuries and happen at a supernatural level, and this opens the doors to worlds in which the reader is immersed with animation, eager for more.

Laurell Hamilton (1963), an American fantasy and romance writer, who is best known for her two series of novels: “Anita Blake: Vampire Hunter”, which runs to nineteen novels and a number of short story collections and other tie-in media such as comic books; and - “Merry Gentry”, which contains eight novels.

More than six million copies of the “Anita Blake” series have been printed and it became a New York Times bestseller. The series has been translated into sixteen languages.

The “Merry Gentry” series of novels is an urban fantasy in which the world of fairy interacts with the “real world”.