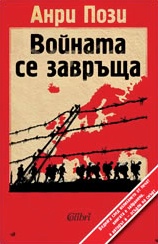 The War Is Coming Back

Henry Pozzi's "War Is Coming Back" was published in 1935, at the daybreak of the Second World War. It describes the intricate political situation in Eastern Europe and is a warning of an eventual conflict between Macedonia, Croatia, Serbia and Bosnia. The whole book is a passionate, somewhat pathetic, appeal for moral international relations.

After the book has been published, it was prohibited in Greece and ex-Yugoslavia. The French press, on the one hand – gave a silent reception to it, and on the other hand – a flood of invective. Notwithstanding, for several months in France were sold about thirty thousand copies, and another ten thousands were distributed world-wide. Two months after the publication of the book the Supreme Court of Serbia sentenced in Pozzi's absence to twenty years compulsory labour, and the book – to death.

This Henry Pozzi's book now seems somewhat naive and romantic, but what nobody can deny is the honest position of its author.

Henry Pozzi (1879 – 1946) was a French politician, diplomat and author who worked – for nearly thirty years – for the French and British Secret Services in the Balkans and Central Europe. He was also, for ten years, in charge of the Balkan Secret Service of the Paris "Le Temps".

His book "War Is Coming Back" (1935) describes the intricate political situation in Eastern Europe and is a warning of an eventual conflict between Macedonia, Croatia, Serbia and Bosnia. The book was prohibited in the Little Entente, Greece, Turkey and in ex-Yugoslavia.