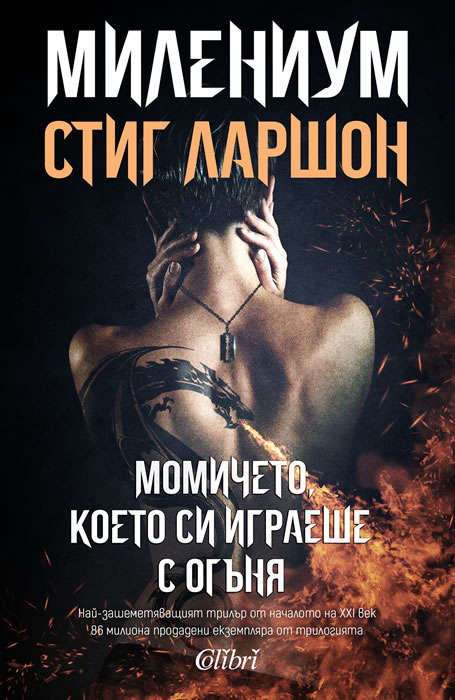 The Girl Who Played with Fire: Book 2 of the Millennium Trilogy

The Girl Who Played with Fire (original title in Swedish: "Flickan som lekte med elden") is the second novel in the million-selling Millennium Trilogy by Swedish writer Stieg Larsson. It was published posthumously in Swedish in 2006 and in English in January 2009.

The book features many of the characters that appeared in The Girl with the Dragon Tattoo, among them Lisbeth Salander, the "Girl" of the title and a social misfit hacker, and Mikael Blomkvist, a investigative journalist and publisher of Millennium magazine.

Mikael Blomkvist, publisher of Millennium magazine, has made his living exposing the crooked and corrupt practices of establishment Swedish figures. So when a young journalist approaches him with a meticulously researched thesis about sex trafficking in Sweden and those in high office who abuse underage girls, Blomkvist immediately throws himself into the investigation.

He’s had no contact with tattooed wild-child and computer hacker extraordinaire Lisbeth Salander since they risked their lives on a terrifying hunt for a serial killer last year (see The Girl with the Dragon Tattoo). But unknown to Blomkvist, Salander has had contact with him – or at least, with his computer hard drive, which she has cloned and is monitoring from the vast new apartment she has bought with her fraudulently obtained fortune.

Repeatedly abused while young, Salander is a traumatized survivor of the care system in Sweden – but she’s no helpless victim. A punk avenging angel with boxing skills, a photographic memory and pathologically focussed on seeking out and punishing violent misogynists, Salander is drawn to the investigation on Blomkvist’s computer. So while Blomkvist and his fellow Millennium idealists research the sex industry according to the rules of good journalism, Salander – spurred on by the appalling case studies of teenage prostitution she finds on Blomkvist's computer – takes matters into her own hands. She plots punishment for the traffickers, but before she can carry out her own brand of justice, she is accused of three murders, all connected to the sex trafficking exposé about to be published in Millennium.

To avoid capture by the police, Salander vanishes. While the tabloids go wild at the idea of a “psychotic lesbian SM Satanist” on the run, Blomkvist tries despairingly to clear her name, though he can’t find her anywhere. When he does eventually make contact, it is to discover that Salander is more embroiled in his investigation than he could have thought possible. It turns out that for Salander, the trail of guilt leads shockingly close to home.

Before his career as a writer, Stieg Larsson was mostly known for his struggle against racism and right-wing extremism. In the middle of the 1980's he helped to start the anti-violence project "Stop the Racism". This was followed by the founding of the Expo-foundation in 1995, where later he became the executive. From 1999 he was appointed the chief editor of Expo, a magazine published by the organization Expo.

Stieg Larsson is the ultimate market phenomenon of the millennium literature – he turned into best-selling author overnight, posthumously. In 2008 he was the most read author in the world after Khaled Hosseini. By the middle of 2010 his “Millennium series” have sold more than 27 million copies in more than 40 countries. The Swedish journalist and writer, born in Skelleftehamn, had a remote lifestyle, living in the province with his grandparents, avidly reading science-fiction. Contrary to his literary inclinations, his breakthrough came with the now officially most famous crime fiction of our times – the Millennium series, manuscripts of three completed, yet unpublished, novels in series that he left at the time of his death (2004). A symbol of an unprecedented commercial success and textual brilliance, Stieg Larsson is more than symptomatic for the present Swedish wave of astounding cultural impact.