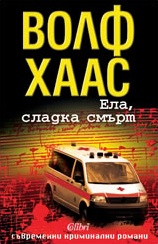 Vienna. Heat. Ambulances. High speed. Tired from his work as detective, Simon Brenner has became an ambulance driver. But the intricate case is not delaying – one murder, one suspect. Ex-detective Brenner is involved in new investigation.

Wolf Haas (1960) is one of the most successful Austrian authors of crime novels. His stories revolve around one main character – an eccentric, grouchy ex-detective Simon Brenner.

Haas's style is based on German dialects, word-plays and it is difficult to translate, but too provocative for its readers. Two of his books – “Komm, süßer Tod” and “Silentium!”, have been filmed.

Woolf Haas has been awarded with: the Deutscher Krimi Preis (German crime literature prize) – three times; the German Thriller Prize (2000); the Literature Prize of the City of Vienna (2004).

Some of Haas's novels are bestsellers.