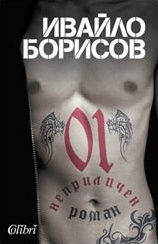 01 - Bulgaria – a country with thousands of years of history, mother of the Cyrillic alphabet, the computer and the yoghurt; the country of the roses, vast mountains, clean beaches, beautiful women and cheap liquor. If you, as well, live with this idyllic picture in mind, it is better to watch Bulgaria only in pictures and the commercials, and, under no circumstances, go there. Otherwise, you will find out that Bulgaria is actually the country of the bumpy roads, corrupted authorities, deluded young people, rough neo-capitalism, petty problems, cynicism reaching up to aggression, bad services and the feeling of pride of all that. “01. Improper Novel” brings to the light everything that the Bulgarian is afraid to be seen by the foreigners so as not to prevent the next bargain with an overpriced, collapsing house built on an illegal property. The book has no pity on all the typical complexes and moral problems of the contemporary Bulgarian society. It is rudely rummaging in the running wound of the degradation having resulted form the socialism and, later, the Perestroyka.

Eagerly expected by the group of faithful fans which was attracted during the years by the unusual writing style of the author, 01 caused a stir even before it was issued and after its release it became one of the best selling books keeping its place in the top three of the biggest book stores in Bulgaria. Together with that, it acquires the status of the most scandalous and discussed book stirring up everyone as well as the opinions of different societal layers throughout the country, some of them not happy at all with the description attributed to them in it. 01 can boast with enthusiastic reviews and exceedingly high evaluation in the social networks for literature such as Goodreads.

Ivaylo Borisov is a strange cross breed – writer-designer-entrepreneur-inventor-businessman. At the age of 33, he doggedly refuses to take the world around seriously and the only answer he can give to the psychological question “Where will you be in 5 years?” is “Getting better”. He travels the world looking for an appropriate place to migrate to, because he doesn`t accept many of the forms of societal control and governance at the places he`s been to and most of all – in his motherland. He is moved by inexplicable things such as cartoon characters and the mentioning of “space” and “universe” makes him pricking. He loves meditating but sometimes this is not enough to subdue the rising fury for everything that is wrong. Though, he would never wear Superman`s costume and save the world because he is too much egocentric. His first steps in the serious writing dates back to him being 8 years old when he began two screenplays simultaneously. During the years his pen became sharper and sharper and his public writing appearances got numerous and had different shapes. Apart from the dozens of creative briefs for clients, he writes for a number of lifestyle magazines during the years and if someone arranges all the internet publications symbols one after another, a series will appear that can go beyond the Moon. The idea for writing a book comes to his mind 7 years ago while he was writing two screenplays but as everything that has touched his chaotic self, three separate plots are formed and they serve for a basis of three separate novels. The first completed is "01".

A Dream About St. Boris I (Illustrated Edition)
Angel Wagenstein

01, a novel by Ivaylo Borisov

01, a novel by Ivaylo Borisov