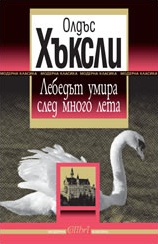 After Many a Summer Dies the Swan

“After Many a Summer Dies the Swan” was published in 1939 under the title “After Many a Summer”. Later in the same year, the novel was republished under its current title, taken from Alfred, Lord Tennyson's poem “Tithonus” (Thitonus is a figure from Greek mythology to whom Zeus gave eternal life but not eternal youth).

The Huxley's novel tells the story of a Hollywood millionaire who likes his life so much that he does not want it to end. Learned about an English nobleman who had discovered a way for longevity, he would do his best to find him.

The story puts many philosophical and social debatable questions, some of which the author scrutinizes in his following novels.

Aldous Huxley (1894-1963) was an English novelist, short stories writer, poet, essayist and critic. He is best known for his dystopian novel "Brave New World" (1931), but also with his essays "The Doors of Perception" (1954) and "Heaven and Hell" (1956) /the titles come from William Blake's "The Marriage of Heaven and Hell"/. In these essays Huxley described his psychedelic experiences under the influence of drugs (mescaline, lysergic asid). Both the essays became cult texts in the psychedelic 1960s.