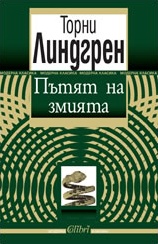 The Way of a Serpent

"The way of a Serpent" tells the story of a farmer family in a poverty-stricken region in the northern parts of Sweden in the nineteenth century. The family formerly owned its land, but had to sell it cheap during a succession of years of famine. The new owner collects his rent as long as there is money in the household, and exploits the women when there is no money.

It is a surprisingly thin novel, considering the width of its content and specifically that it spans over three generations. The language is stark and spartan, and is heavily influenced by the local dialect. The main theme is the family's struggle for survival, where both the mother and the daughters have to contribute to indulge their creditor.

The novel is considered to be one of Lindgren's greatest works, and was made into a film by Bo Widerberg in 1986.

Gustav Torgny Lindgren (born 16 June 1938 in Raggsjö, Norsjö, Västerbotten County) is a Swedish writer. He is the son of Andreas Lindgren and Helga Björk. He studied in Umeå to become a teacher and worked as a teacher until the middle of the 1970's. He was for several years a local politician in the Swedish Social Democratic Party. In the 1980's he converted to the Catholic faith.

Lindgren began his writing career as a poet in 1965. But the big breakthrough wasn't until 1982 with The Way of a Serpent (Swedish: Ormens väg på hälleberget). Lindgren was translated into more than thirty languages and is one of Sweden's most internationally successful contemporary writers. He became a member of the Swedish Academy in 1991.
Related Books

Out of Africa
Karen Blixen