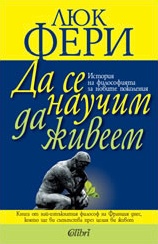 A history of philosophy to inspire readers, young and old. Ferry was formerly the Minister for Youth and Education in France, and is the author of "Learning to Live", which sold over 300,000 copies. He shows how philosophy is essential to our everyday lives, and has been throughout history.

Categories
Non-FictionSocietyHistory
About the Author

Luc Ferry (born January 1, 1951 in Colombes, Hauts-de-Seine) is a French philosopher and a notable proponent of Secular Humanism. He is a former member of the Saint-Simon Foundation think-tank.

He received an Agrégation de philosophie (l975), a Doctorat d’Etat en science politique (1981), and an Agrégation de science politique (1982). As a Professor of political science and political philosophy, Luc Ferry taught at the Institut d'études politiques de Lyon (1982-1988) - during which time he also taught and directed graduate research at the Universite de Paris 1 (Pantheon-Sorbonne) - at the University of Caen (1989-19), and at the Paris Diderot University (since 1996).

From 2002 to 2004 he served as the Minister of Education on the cabinet led by the conservative Prime Minister Jean-Pierre Raffarin. During his tenure, he was the minister in charge of the implementation of the French law on secularity and conspicuous religious symbols in schools. He received the award of Docteur honoris causa from the Université de Sherbrooke (Canada).