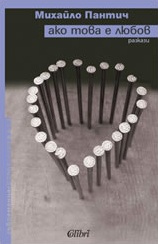 If This Is Love

The short stories of Mihajlo Pantić are part of what is described as "New Belgrade stories", last but not least, because they depict the individual fates and secrets of New Belgrade residents.

What is typical about Pantić's stories is the steady change of various points of view; the roles of the observer and the participant; interweaving of a leading narrative with the comment on it; constantly rebuttal of established truths to create a unique mixture of fictional freedom and documentary precision, provocation and delight for the reader.

For Pantić an impulse for a good story could be a quotation, a good metaphor, an interesting comparison, an inversion of a real or fictional story, quoted (auto) biographical confession, mixing real and fictional names, pastiche, placed alongside an accurately described real case, person or event.

Some of Mihajlo Pantić's short stories have appeared in various anthologies and have been translated into English, French, German, Italian, Danish, Czech, Slovenian and Macedonian.

Mihajlo Pantić is a vice president of the Serbian PEN center board. He teaches “History of Serbian Literature” and “Creative Writing” at the Faculty of Philology in Belgrade. He is also the editor of literary editions “Albatros” and “Pan” and of the literary magazines “Svet reči” (“The World Of The Words”) and “Književni glasnik” (“The Literary Journal”).