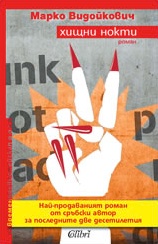 The novel “The Claws” recreates the turbulent events of the winter of 1996 - 1997, when the coalition “Together” and the student movement led off on the streets of Belgrade the historical protests against the Milosevic's regime which protests extended several months. The events, the places and the political persons in the narrative are documentary authentic and are with their real names.

The novel is furious and explosive, powerful geyser of rage because of everything that the author's generation ("the generation of hopelessness") was forced to suffer, because of the reason that this manner of living has deformed and depersonalizationed it and that is why this generation is unable to create its own life.

The language of the novel is a verbal, colloquial, Belgrade slang.

“The Claws” has became a cult book of the generation of the nineties.

Marko Vidojković (1975) was born in Belgrade. He is one of the most popular Serbian writers of the young generation. Besides being a writer Marko Vidojković is also a managing editor of the Serbian “Playboy” and “Maxim” magazines. And more he is a singer of a famous punk group - “On The Run”.

In his novels, Marko Vidojković is as provocative as in his public life. His language is direct and often obscene. Vidojković's novels are placed on the streets of Belgrade, portraying lost and angry young people, drowned by lack of understanding and hypocrisy of the society.